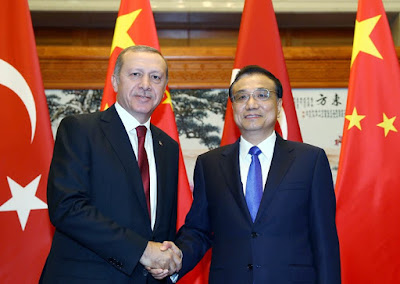 BEIJING, July 29 -- Chinese Premier Li Keqiang met with visiting Turkish President Recep Tayyip Erdogan on Wednesday, urging enhanced political trust and accommodation of each other's key concerns.
China attaches great importance to its substantial cooperation with Turkey, Li told Erdogan at the Great Hall of the People.
He urged both sides to give full play to the bilateral cooperation committee at the vice premier's level, to coordinate cooperation in such areas as politics, trade and culture.
China hopes to strengthen cooperation with Turkey in such areas as new energy, light manufacturing, communication and infrastructure, including railway, to boost balanced trade, Li said. He also called for stronger cooperation in aviation, aerospace and finance, urging Turkey to offer convenience and support for Chinese investment.
Erdogan told Li Turkey has a strong desire and clear target to enhance ties with China, and hopes to further upgrade bilateral trade.
He welcomed China's expanded investment and cooperation with Turkey in areas including infrastructure building, energy, communication, finance, aviation and project contracting.
Turkey expects to become a manufacturing and logistics base for Chinese enterprises, and hopes to explore the third-party market with China, he said.
Invited by Chinese President Xi Jinping, Erdogan is on a state visit to China on Wednesday and Thursday. It is his first visit to China since he took office in August, 2014.