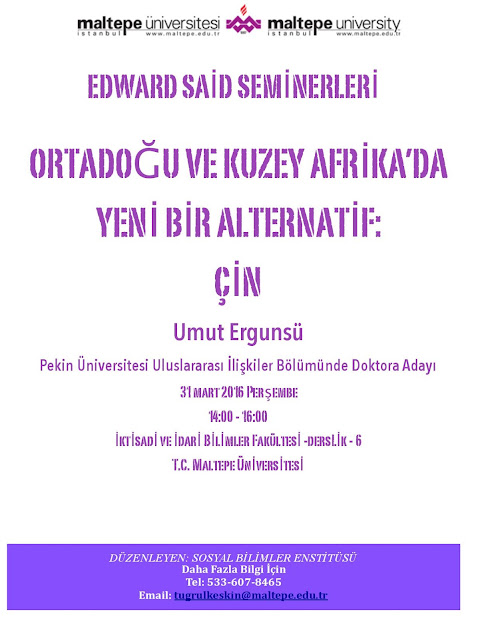 Posted by Tugrul Keskin at 9:40 AM

JERUSALEM, March 29 (Xinhua) -- Israeli and Chinese leaders promised here Tuesday to promote innovation cooperation in various fields, including economy and trade, science and technology, agriculture, health and education.
The vow was made when Israeli Prime Minister Benjamin Netanyahu and President Reuven Rivlin held separate talks with Chinese Vice Premier Liu Yandong.
Netanyahu told Liu that Israel admires the achievements China has made and regards the country as a top priority of its foreign policy.
Israel appreciates that China made the innovation-driven development as a national strategy, said the prime minister, adding that Israel is willing to strengthen exchanges and become an ideal partner of China in innovation cooperation.
Netanyahu said Israel also looks forward to further enhancing cooperation with China in the fields of agriculture, education, science and technology, health care, infrastructure and energy.
He stressed that deepening bilateral pragmatic cooperation is important as such a move is not only consistent with their common strategic interests, but also instrumental in promoting peace and development through the world.

China-Middle East Relations in the Context of Xi Jingping's One Belt and One Road Initiative -March 29, 2016 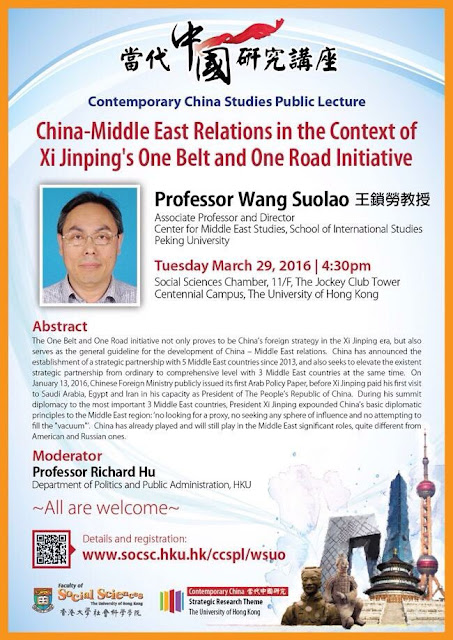 Posted by Tugrul Keskin at 7:55 AM

12-03-2016 ISLAMABAD, Mar 12 (APP): A 15 member Chinese delegation who visited Islamabad Chamber of Commerce and Industry (ICCI) here on Saturday hoped that the Chinese investment in Pakistan under China Pakistan Economic Corridor (CPEC) would help generate over 10,000 more job opportunities in the country. The delegation was led by Gan Rongkun, Vice Governor of Hubei Province and discussed with the local businessmen prospects of investment and joint ventures in One Belt OneRoad and China Pakistan Economic Corridor projects.  As a key component of the Belt and Road Initiative, CPEC- a 46 billion dollar investment project envisages expansion of highways, railways, gas and oil pipelines and fiber channels from Kashgar in China to Gwadar port in Pakistan.

In the decade after its establishment, the China-Arab States Cooperation Forum has completed its normalized, institutional construction and established more than ten kinds of communication mechanism, such as ministerial meetings, senior officials meeting, business conference and investment seminars, which cover a variety of fields in political, economic, cultural, and humanistic cooperation. It not only enriched the connotation of China-Arab cooperation, but created a new cooperation mode. Therefore, the Arab World and China have developed a relationship of mutual promotion, mutual complementation and sound development multilaterally and bilaterally, officially and privately. The development of the Forum benefited both sides insisting on mutual respect, mutually beneficial cooperation and common development concept. In the next decade, the Forum should deepen strategies, adhere to innovation, emphasize on effectiveness, and create a better tomorrow for the work of the Forum.

Why does China have women-only mosques?

The Islamic world is wide and various, its points of view almost as numerous as its people. And Islam in China, with its long tradition of women-only mosques, provides a good illustration, says Michael Wood.
In the middle of the plain of the Yellow River in Henan province is the city of Kaifeng. The old capital of the Song Dynasty, 1,000 years ago, it was one of the greatest cities anywhere in the world before the 19th Century - and a meeting place of peoples and faiths.
In the narrow alleys of the old town are Buddhist and Daoist temples, a shrine to the Goddess of Mercy, always teeming with people. There are Christian churches, and Muslim mosques - both religions came in the 7th Century (China has some of the oldest Muslim communities outside the Near East).

CHINA AND THE MIDDLE EAST
Neoliberalism with Chinese Characteristics and Political Transformations in the Middle East
http://chinaandthemiddleeast.blogspot.com/

Description and Objectives:
The increasingly neoliberal economy that has developed since the early 1980s has led to an emergence of a vibrant middle class in China. This new demographic, roughly 350-400 million people, began to consume more. This has continued to shape Chinese Foreign Policy towards oil producing countries, particularly in the Middle East after Xi Jinping came to power in 2013. One of the first signs of these changes can be seen in the proposal of a new Silk Road initiative, introduced by Xi Jinping. Over the last two years, we have seen the increase of Chinese political and social activities in the region, fueled by the economic needs for PRC. As a result of this new political strategy, the PRC started to play a more active role within the Middle Eastern political arena. Hence, Xi Jinping visited Pakistan, Egypt, and Saudi Arabia. Additionally, Chinese social and cultural activities began to appear more visibly within the universities and educational institutions in the Middle East.  Hanban Institutes started to open and finance Confucius Institutes in the region that facilitate Chinese cultural and language classes and promote mutual understanding between China and the Middle East. For example, these institutes have arisen in Turkey, Israel, Iran, Lebanon, Egypt, Tunisia, Algeria, Jordan, UAE, Armenia, Azerbaijan and Morocco. China has also become one of the largest economic and trade partners with Middle Eastern states such as Iran, Turkey, Pakistan, Egypt, Israel. Therefore, we would like to make this academic initiative a permanent conference meeting, and each year, we will organize a China and the Middle East Conference in different countries in collaboration with other universities.

We organized a very successful first academic conference on this topic in collaboration with Beijing University, on March 17-18, 2015. The conference took place in Beijing University and 24 papers were presented within six different panels. On the second day, the newly opened Indiana University Beijing office hosted two panels. The selected conference proceedings (approximately 6-8) will be published by a peer-reviewed academic journal, the Sociology of Islam, in the Winter of 2016. You will find the first conference program at the following homepage:
http://chinaandthemiddleeast.blogspot.com/2015/02/international-conference-china-in.html

Why the conference will be held in Qatar:
This conference is being held in Qatar precipitated by the Qatar Minister of Culture, Arts and Heritage, Dr. Hamad bin Abdulaziz Al Kuwari signing a partnership agreement with the People’s Republic of China for the 2016 Year of Culture program.
http://dohanews.co/china-signs-on-to-be-qatars-next-year-of-culture-partner/
As a result of this conference and academic initiative on China and the Middle East, we established a new academic mailing list on China and the Middle East, hosted by Virginia Tech University. In our second upcoming conference, we will examine social, political and economic relations between China and Middle Eastern states and societies in the context of the neoliberal economy. The conference proceedings will also be published.

9:30–9:45 AM
Keynote Speech:
H.E. LI CHEN, Ambassador of the People's Republic of China to the State of Qatar.

Moderator: Mahjoob Zweiri, The chair of the department of humanities, Qatar university

15:00–16:45 PM
PANEL III: SOCIAL AND POLITICAL CHANGES IN CHINA AND THE MIDDLE EAST IN THE CONTEXT OF NEOLIBERALISM
Moderator: Dr. Ahmed Abou Shouk, Professor of history, Department of Humanities

The Neoliberal Relationship between the Kurdish Regional Government and Turkey: Is There a Role for China?  - Lenore G. Martin, Emmanuel College and Harvard University, USA.

The ‘Arab Spring’ and South China Sea Tensions:  Analyzing China’s Drive to Energy Security - Henelito A. Sevilla, the Assistant Dean for Administration and Public Affairs at the Asian Center, University of the Philippines, Philippines.

The Beijing Consensus in the Middle East: Neo-liberalism without Democracy?  - Mojtaba Mahdavi, University of Alberta, Canada.

The decline of American hegemony in the Gulf: the role of China - Michael McCall, Leiden University.