Chinese Image in the Western Academia: Chinaphobia and Neo-orientalism in Chinese Studies in the US After the Cold War Era

Chinese Image in the Western Academia:
Chinaphobia and Neo-orientalism in Chinese Studies in the US After the Cold War Era

ABSTRACT: Edward Said’s theory of Orientalism sparked the rise of a more critical understanding and discussion within the social sciences and humanities on how Orientalist scholarship has produced a false image rather than providing any academic objectivity in the fields of history, anthropology and political science. However, the old colonial mapping and containment of culture embedded within Middle East Studies has not been critically evaluated and updated to address modern realities in the years after Said’s work on Orientalism, not just in Middle East Studies, but also as it applies to African, Asian and Latin America Studies. This is due to the large scholarly industry of area studies, which has grown and benefitted from the plethora of state institutions that support and provide grants for academic careerism. According to Wallerstein, post-war language training was “the major justification for post-war U.S. government financing of area studies” Probably one of the best examples of this trend has been demonstrated within and through Turkish and Ottoman Studies in the US. On the other hand, area studies itself has an embedded colonial structure. However, over the last fifty years the colonial approach has started to change, influenced by facets of neoliberal globalization, the collapse of the Soviet Union, and the emergence of modern China in the late 1980s. Instead of disappearing however, the old colonial model has been replaced with a new approach based on the neoliberal model of neo-orientalism and public scholarship. As a result, in the 1990s we started to see a more aggressive and hegemonic form of scholarship that uses a neoliberal understanding of human rights, academic freedom, religious freedom, democracy, and press freedom as tools in service to the neo-orientalist perspective. In the 1990s, modern China was emerging, while basic political concepts were reconfigured in Washington DC. These new economic and political realities have led to many important implications on academia, specifically for Chinese Studies in the US. In this article, I argue that the Neo-Orientalism perspective embedded in Western academia and also within the media and think-tanks, is a continuation of the cold war policy model.

‼9 Reasons Why You Should Visit Shanghai at Least Once in Your Lifetime‼️
- Shanghai is full of beautiful CONTRASTS - One great thing about this city is that you can always go cheaper (and find a full meal for ¥10 / $1.45 and you can always go more expensive (and spend $735 per person for a 20-course dinner).
- There’s always something NEW in Shanghai - Old restaurants, shops, and buildings are constantly being overhauled for new and renovated models.
- Shanghai’s skyscrapers are record-breaking - Opened in 2016, the Shanghai Tower is officially the world’s second tallest building at 632 metres and boasts the world’s second fastest elevator, which travels at a staggering 20.5 metres per second.
- Shanghai’s nightlife is diverse - New York may be the city that never sleeps, but Shanghai gives it a run for its money.
- Shanghai’s architecture is trendy - Shanghai is home to a unique style of lane house called shikumen, which combines Western and Chinese elements.
- Shanghai’s history is fascinating. - Shanghai is a young city by Chinese standards. Up until the 1800s, it was little more than a fishing outpost.
- Shanghai has numerous surrounding water towns - These ancient areas built on canals offer a tranquil getaway from the fast-paced city centre.
- Shanghai is the perfect jumping off point to other Chinese destinations - Once you’ve had your fill of Shanghai, if that ever happens, it’s simple (and cheap!) to get out of town.
- You don’t have to learn Chinese to get by in Shanghai - Due to its history of multiculturalism and rising wealth, many Shanghainese speak enough English to ensure that your ni hao (‘hello’) and xie xie (‘thank you’) are all you need to get by.
__________
Come to #ShanghaiUniversity, explore Shanghai on your own and never get disappointed! 🤩
_________
#WhyShanghai #ShanghaiUni #Shanghai #WhatToDoInShanghai #StudyInShanghai #StudyInChina #StudyAbroad 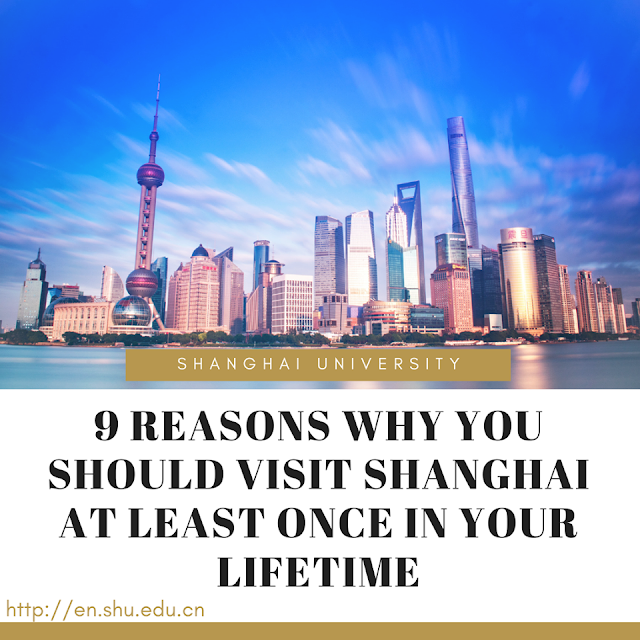 Posted by Tugrul Keskin at 7:47 AM

Chinese Li-nian no less important than a theory


While some Chinese scholars claim the book Feigong《非攻》(Against Offensive War)written by the philosopher Mozi (墨子, ca. 470 – ca. 391 BCE) should be considered the first in the world on international relations, it's a fact that the views of Western scholars have dominated contemporary theories on the subject. Important ideas such as realism, liberalism and constructivism, among many others, are not invented by Chinese scholars.
In 1977, Stanley Hoffmann (1928~2015) wrote an essay arguing that theories of international relations are "an American social science." Many years later, Stephen M. Walt found no conclusive reason to doubt that international relations theories remained dominated by scholars from the Anglo-Saxon world (the United States, the United Kingdom, and Canada).
However, there was a caveat in his 2011 article: "That said, I do have this nagging doubt that maybe I've missed something or someone. So, nominations are now open: who are the most important writers on foreign affairs operating outside the Anglo-Saxon world?"
Differences between a theory and a li-nian
In the 1980s, an ambitious idea appeared in China, calling for domestic scholars to establish a Chinese school of international relations theories, or "theories with Chinese characteristics." Three or four decades have elapsed since then, however, without that dream coming true.
It does not mean that Chinese scholars in the field of international relations are incompetent. Rather, a few of them have yet been able to win recognition by their counterparts around the world.
Undoubtedly, theories of international relations are important and necessary. However, for the purpose of making contributions to world peace and development, or understanding the world in a better way, we need to remember that diplomatic li-nian (理念) is no less important than a theory.
There is no fixed translation for the word li-nian. It has meanings encompassing belief, idea, thinking, doctrine, philosophy, concept, principle, etc.
Differences between a theory of international relations and a diplomatic li-nian are evident. On the one hand, while a theory is the outcome of long-term academic research by scholars, diplomatic li-nian is expressed by leaders of a particular country in their speeches or writings. On the other hand, a theory is often an abstract type of thinking and reasoning, not always closely related to the reality of the world situation. However, a diplomatic li-nian never fails to reflect the perception and judgment of political leaders about the world. Therefore, a country's foreign policies are influenced more by li-nian than theory.
Since 1949, Chinese leaders have put forward quite a few ideas in this regard. Some of them are outdated as the world situations and domestic conditions on which they were based have dramatically changed. For instance, Mao Zedong suggested the world's proletariat should (and would) unite to 'liberate humanity." When the Cultural Revolution (1966~1976) ended, this particular li-nian was dropped.
A community of shared future for humanity
In recent years, to build a community of shared future for humanity has become China's most important diplomatic li-nian. It first appeared in the White Paper entitled "China's Peaceful Development" published by the Chinese government on September 6, 2011.
At the 18th National Congress of the Communist Party of China (CPC), in November 2012, the then Party chief Hu Jintao reaffirmed this in his report.
In March 2013, President Xi Jinping embarked on his first overseas trip to Russia and Africa as China's paramount leader. In his speech delivered to a university in Moscow, he said he likened the world to a global village or a community of a shared future with deepening inter-dependence among nations. Since then, he has repeatedly mentioned this diplomatic li-nian on various occasions.
At the 19th CPC National Congress in October 2017, this particular li-nian was written into the Party constitution; and, at the 13th National People's Congress session in March 2018, it was added to the national Constitution. As a result, it has become the will of the nation and the Party.
Apart from the community of a shared future for all humanity, President Xi has also proposed to construct such a community for Asia, the Shanghai Cooperation Organization, China-Africa, China-Latin America, China-ASEAN, China-Arab, China-Cambodia, China-Pakistan, China-Belarus, China-Vietnam, China-Uzbekistan, China-Kazakhstan, China-Laos, and China and its neighbors. Moreover, he has also suggested a similar development in cyberspace.
From his various speeches, we can see that this is composed of five pillars: peace, security, economic prosperity, cultural harmony and a green environment. These objectives will not be realized shortly, but humanity should not stop cherishing this dream for the world.
In conclusion, although no Chinese school of international relations theories is born yet, diplomatic li-nian like building a community of a shared future for all humanity is much more important and helpful. And, this philosophy can also serve as a guiding principle for Chinese scholars to establish a Chinese school of international relations theories.
Posted by Tugrul Keskin at 11:38 PM