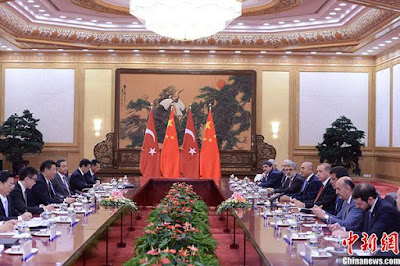 BEIJING, July 29 (Xinhua) -- Chinese President Xi Jinping held talks with his Turkish counterpart Recep Tayyip Erdogan on Wednesday, and they pledged mutual support on issues of major concern.
The leaders agreed that the two sides should keep in mind the general direction of the bilateral relationship, strengthen political trust and link their development strategies.
China and Turkey, both important members of the G20, face mounting common challenges and obligations against the backdrop of a complex and volatile international situation, a gloomy global economy and grim security situation in West Asia and North Africa, said the Chinese president.
"The two sides should enhance mutual trust and lay a more solid foundation for friendship," Xi said.
Xi said he appreciates President Erdogan's and the Turkish government's stance opposing all forms of terrorism as well as all attempts in Turkish territory to harm China's sovereignty and territorial integrity.
"[China] is willing to boost law enforcement and security cooperation between the two countries," Xi said.
China looks forward to closer communication between legislatures and government agencies of the two countries to ensure their strategic cooperation progresses along the right track, said the Chinese president.
Xi said China stands ready to link the Belt and Road initiative with Turkey's development strategy in pursuit of common prosperity. He also proposed the two sides implement a mid- and long-term plan for trade and economic cooperation between the two countries, which was signed after their talks at the Great Hall of the People.
Xi also hoped for more coordination with Turkey on global economic governance, climate change and other issues to safeguard the common interests of the two nations and other developing countries.
Erdogan, who is making a two-day state visit to China from Wednesday to Thursday, said the Turkish government always looks at ties with China from a strategic perspective and is committed to the development of Turkey-China strategic cooperation.
Turkey is willing to make joint efforts with China to boost cooperation on trade, investment, technology, industry and infrastructure, said the visiting president.
Erdogan stressed that the Turkish government sticks to the one-China policy, supports China's sovereignty and territorial integrity, and opposes terrorist activities of the East Turkestan Islamic Movement (ETIM) aimed at China.
Turkey will boost cooperation with China and will not allow strategic cooperation with China be affected by ill-minded forces, Erdogan said. Turkey is also a victim of terrorism, he added.
The Turkish government will resolutely fight all forms of terrorism and hopes for international society's support, Erdogan said.
Erdogan said China is an important player in the international community and that Turkey is willing to increase communication with China on major international and regional affairs.
Prior to the talks, Xi held a red-carpet ceremony to welcome the Turkish president.
Earlier on Wednesday, Erdogan laid a wreath at the Monument to the People's Heroes in Beijing.
Posted by Tugrul Keskin at 4:10 AM