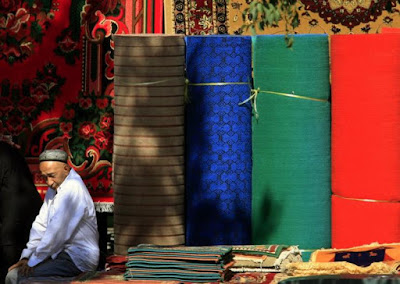 An al Qaeda propaganda magazine has described the far western Chinese province of Xinjiang, home to the native Uighur Muslim population, as a region that needs to be “recovered [into] the shade of the Islamic Caliphate.” Jihadist organizations like al Qaeda and the Islamic State have been making a push to recruit members from the Muslim minority in China.
However, Uighur exile activists in the U.S. reject the idea that Xinjiang needs to be "reclaimed" into any caliphate, and appeals by radicals to Uighur Muslims. “The Uighur people will simply ignore such claims,” Alim Seytoff, president of the Uyghur American Association and director of the Uyghur Human Rights Project, said in an interview. (The groups use a variant spelling.) “These claims are mostly likely attempts by these groups to lure and recruit disillusioned young Uighurs to their cause. That is not going to happen because Uighurs do not share their ideology.”
The first issue of Resurgence, an English-language magazine produced by a media wing of al Qaeda, As-Sahab, includes an article about the Islamic community in East Turkistan, as they call the territory the Chinese call Xinjiang, titled “Did You Know? 10 Facts About East Turkistan.” As pointed out by the South China Morning Post of Hong Kong, the article features many inaccuracies about the area and China’s rule over it to further their belief that the Muslim religion and its followers are threatened by Han Chinese. For example, it claims that teaching the Quran is illegal in China, when in fact China recognizes Islam as one of the country’s five official religions. Though restrictions have been put on government officials practicing Islam, the country does not have a blanket ban on practicing the religion.