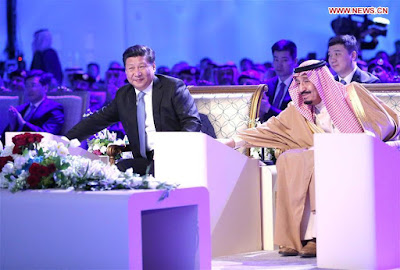 RIYADH, Jan. 20 (Xinhua) -- After attending the launch ceremony of the Yasref oil refinery, China's largest investment project in Saudi Arabia, President Xi Jinping on Wednesday wrapped up his visit to the kingdom, which was lauded as "historic."
Xi's two-day state visit has witnessed an upgrade of China-Saudi Arabia relations and stepped up energy cooperation between the two countries.
STEPPING UP ENERGY COOPERATION
Accompanied by Saudi King Salman bin Abdulaziz Al Saud, the Chinese president attended the ceremony at the King Abdullah Petroleum Studies and Research Center in Riyadh to remotely inaugurate the operation of the Yasref oil refinery, a joint venture between Saudi Aramco and China's Sinopec.
Xi said that energy cooperation between the two countries has brought tangible benefits to both peoples.
The launch of the refinery, he said, conforms to not only the Saudi national development strategy, but also China's strategy of carrying out cooperation with countries in the regions outlined in the China-proposed Belt and Road Initiative, a vision Xi put forward in 2013 to boost interconnectivity and common development along the ancient land and maritime Silk Roads.
As a full-conversion refinery covering 5.2 million square meters in the industrial city of Yanbu on the west coast of Saudi Arabia, Yasref plays a fundamental role in the future of Yanbu industries, the company said.
It is the first overseas refinery Sinopec has built. The two companies signed the agreement in early 2012 with a total investment of nearly 10 billion U.S. dollars. Aramco holds 62.5 percent of the stake while Sinopec holds 37.5 percent.