China began to show its role in Middle East 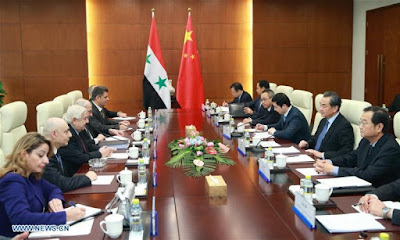 China will invite members of the Syrian government and opposition to visit as Beijing looks for ways to help with the peace process, China's Foreign Ministry said on Monday. In addition, days ago Vice Primer of Iraq just left with five signed agreements with Chinese government.
This is part of China's efforts to play a constructive role in promoting a political resolution to the crisis. China has played host to both Syrian government and opposition figures before, though it remains a peripheral diplomatic player in the crisis.
To Chinese, millitary is the last option to solve any disputes, and dialogue is the only way to find solutions for Middle East issues, while peace, social and economic developments are the basic conditions.