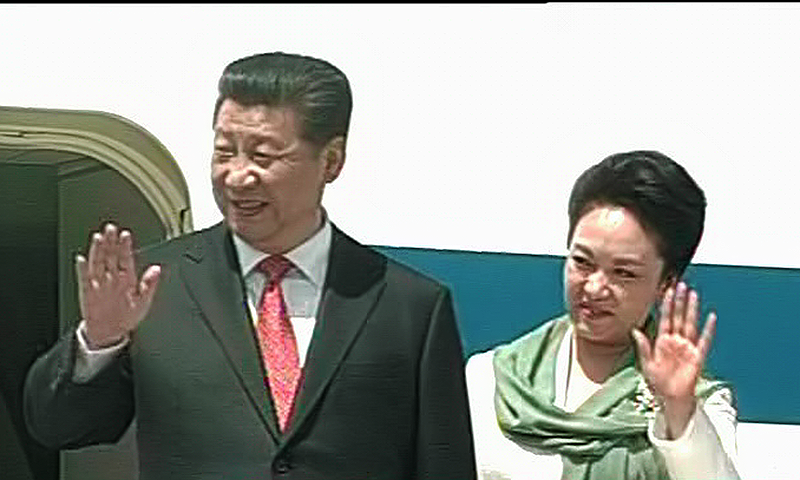 ISLAMABAD: Chinese President Xi Jinping arrived in Islamabad on his maiden visit to Pakistan on Monday. The much anticipated visit is the first by a Chinese president to Pakistan after nine years.  The Chinese president was received at the Noor Khan airbase by President Mamnoon Hussain, Prime Minister Nawaz Sharif, Chief of Army Staff (COAS) Gen Raheel Sharif, Defence Minister Khwaja Asif and members of the prime minister's cabinet.  Accompanying the Chinese president is a high-level delegation comprising businessmen and senior government officials.  A 21-gun salute and guard of honour was presented to welcome the Chinese president.
Banners reading "Pakistan-China Friendship Zindabad", portraits of the Chinese and Pakistani presidents and flags of the two countries waving across Constitution Avenue welcomed Mr Jinping to the capital.
Mr Jinping's visit is being dubbed as a ‘fate-changing visit’ as he is expected to roll out nearly $28 billion for the first phase of the $45bn flagship Pakistan-China Economic Corridor (PCEC) Project.
Stringent security measures have been taken in the capital while security personnel have been deployed on all the important city roads in wake of the Chinese president's visit.