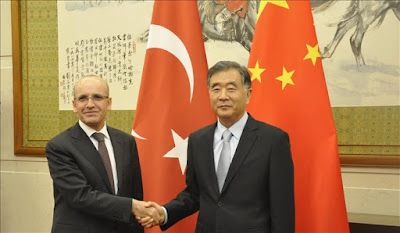 Turkey sees China as a strategic partner, Turkish Deputy Prime Minister Mehmet Simsek said Friday.  Simsek and his Chinese counterpart Wang Yang came together in a delegation meeting at Diaoyutai State Guesthouse in Beijing, as part of the former's official visit to China.  Both dignitaries agreed to boost economic cooperation between the two countries.  Wang Yang expressed his pleasure with intensified bilateral relations, adding: "We would like to expand cooperation in all areas."  Trade volume between Turkey and China reached $21.66 billion in the first 10 months of 2017, according to Turkish Statistical Institute (TurkStat).  Simsek and Wang Yang also discussed regional and global issues. The Turkish deputy premier also met officials from the People's Bank of China (PBC), the Industrial and Commercial Bank of China (ICBC), the Bank of China (BOC) and some other financial institutions in Beijing on Friday.  He sought Chinese investment for infrastructure projects in Turkey.  Simsek will go to Shanghai on Saturday.
Posted by Tugrul Keskin at 10:43 PM