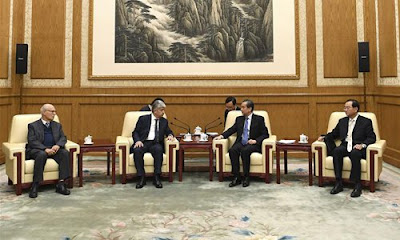 Chinese Foreign Minister Wang Yi (2nd R) meets with Ahmed Majdalani (2nd L) and Nabil Shaath (1st L), who came to China as representatives of the Palestinian President, at the Great Hall of the People in Beijing, capital of China, Dec. 22, 2017.
China firmly supports the two-state solution and the establishment of an independent State of Palestine, which enjoys full sovereignty on the basis of the 1967 borders and with East Jerusalem as its capital, Foreign Minister Wang Yi said on Friday.  Wang made the remarks during a meeting with Ahmed Majdalani and Nabil Shaath, who came to China as representatives of the Palestinian President.  "Peace in the Middle East cannot be achieved unless the Palestine issue is solved, as this issue is a root one in the region," Wang said, calling on the international community to reflect on this issue and take actions.  The UN General Assembly on Thursday adopted a resolution affirming that any decisions and actions that alter the status of Jerusalem are null and void.  Wang said that this not only reflects a definite attitude to adhere to the consensus of the international community, but also voices the call for speeding up the Middle East peace process.  He called on the Palestinian side to form a united force, stick to solving disputes through dialogue, maximize the role of the United Nations and voice up the call for peace.  Majdalani and Shaath expressed gratitude for China's support to the Palestinian people's just cause and hoped that China will play a bigger role in the Middle East.  They also spoke highly of China's four-point proposal in solving the Palestine issue, which hopefully will become the basis for the international community's efforts in promoting peace.  The four-point proposal includes firmly advancing the political settlement on the basis of the two-state solution, upholding a common, comprehensive, cooperative and sustainable security concept, coordinating efforts of the international community and strengthening the concerted efforts for peace, as well as comprehensively implementing measures and promoting peace with development.
Posted by Tugrul Keskin at 2:44 AM