On China By Henry Kissinger 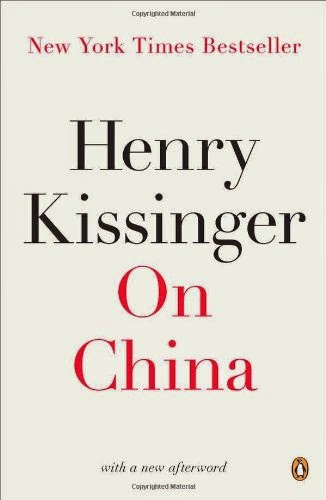 In this sweeping and insightful history, Henry Kissinger turns for the first time at book-length to a country he has known intimately for decades, and whose modern relations with the West he helped shape. Drawing on historical records as well as his conversations with Chinese leaders over the past forty years, Kissinger examines how China has approached diplomacy, strategy, and negotiation throughout its history, and reflects on the consequences for the global balance of power in the 21st century.

Since no other country can claim a more powerful link to its ancient past and classical principles, any attempt to understand China’s future world role must begin with an appreciation of its long history. For centuries, China rarely encountered other societies of comparable size and sophistication; it was the “Middle Kingdom,” treating the peoples on its periphery as vassal states. At the same time, Chinese statesmen-facing threats of invasion from without, and the contests of competing factions within-developed a canon of strategic thought that prized the virtues of subtlety, patience, and indirection over feats of martial prowess.

In On China, Kissinger examines key episodes in Chinese foreign policy from the classical era to the present day, with a particular emphasis on the decades since the rise of Mao Zedong. He illuminates the inner workings of Chinese diplomacy during such pivotal events as the initial encounters between China and modern European powers, the formation and breakdown of the Sino-Soviet alliance, the Korean War, Richard Nixon’s historic trip to Beijing, and three crises in the Taiwan Straits. Drawing on his extensive personal experience with four generation of Chinese leaders, he brings to life towering figures such as Mao, Zhou Enlai, and Deng Xiaoping, revealing how their different visions have shaped China’s modern destiny.

With his singular vantage on U.S.-China relations, Kissinger traces the evolution of this fraught but crucial relationship over the past 60 years, following its dramatic course from estrangement to strategic partnership to economic interdependence, and toward an uncertain future. With a final chapter on the emerging superpower’s 21st-century world role, On China provides an intimate historical perspective on Chinese foreign affairs from one of the premier statesmen of the 20th century.
Posted by Tugrul Keskin at 10:35 PM