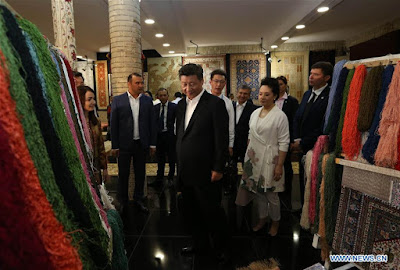 BUKHARA, June 21, 2016 (Xinhua) -- Chinese President Xi Jinping (C,front) and his wife Peng Liyuan visit a carpet and silk workshop in the old city of Bukhara as accompanied by Uzbek Prime Minister Shavkat Mirziyoev, in Bukhara, Uzbekistan, June 21, 2016. (Xinhua/Lan Hongguang)  Bukhara has long served as a center of trade, scholarship, culture and religion, and has over 2500 years of history.  It's also where President Xi's state visit to Uzbekistan began.  The city is renowned for its ancient fortress, known as The Ark of Bukhara. The massive walls of the ark protect many treasures, including old copies of the Holy Quran, art, and ancient coins and weaponry.  President Xi and Peng Liyuan also visited the Samanid mausoleum, in the historical urban part of the city.  The mausoleum was built in the 10th century, and is the resting place of Ismail Samani- a powerful amir from one of the Persian dynasties that ruled in Central Asia.  Their next stop was the Islamic religious complex of Poi Kalyan, meaning "The Foot of the Great".  At the heart of the ancient complex is  the Kalyan minaret. It's also home to the Kalyan Mosque and the Mir-i Arab Madrasa, a historic religious school.  Xi Jinping and Peng Liyuan then went to a carpet and silk workshop, where Xi asked the textile workers about the materials and art of the buildings, local customs, and the historical culture of Bukhara.  Xi Jinping described Bukhara as a shining pearl lying on the ancient Silk Road. He said the tour gave him a deeper understanding of the historical roots between China and Uzbekistan.  The president added that it is beneficial for both sides to carry forward the spirit of the Silk Road and promote the friendship between the two peoples.