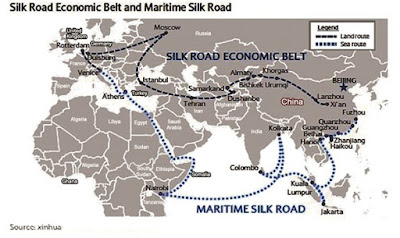 The first-ever China-UAE Conference on Islamic Banking and Finance held at the end of May in Beijing has again put China’s Islamic finance initiatives with regards to its colossal New Silk Road project in the focus. The project seeks to connect the economies and infrastructures of countries along the old Silk Road that was an ancient network of trade routes that ran across regions of the Asian continent connecting the West and East from China to Arabia and further to the Mediterranean Sea. The revival of these old trade routes has been brought up in 2014 by Chinese President Xi Jinping and is now called the “One Belt, One Road” initiative. It is important for the global Islamic finance industry for two reasons. Firstly, the network will connect and include the world’s main centres of Shariah-compliant finance, the Middle East and Southeast Asia. Secondly, China cooperates with the Organisation of Islamic Cooperation in organizing and financing the Silk Road project that also crosses several Islamic countries in Central Asia and will make use of sukuk and other Islamic finance vehicles primarily for infrastructure developments.  Overall, the trade volume between China and member countries of the Organisation of Islamic Cooperation is worth more than $500bn, which is substantial and will get another boost with the Silk Road project. “Initiating investment and developing economic trade communications with Islamic countries is one of important components of the One Belt, One Road strategy,” says Baozhong Du, Bejing-based political scientist and economic consultant to the government, adding that “there will be a significant increase in the use of Islamic financing tools and investment in major construction projects. If the Chinese government could enhance its cooperation with Muslim countries through Islamic finance, that it will significantly progress the development of the Silk Road project.” It is expected that state-owned enterprises and private companies in China involved in the project are getting more willing to explore Islamic finance and issue sukuk both in US dollar and renminbi to finance large developments such as railways, ports, power plants and industrial zones along the route. They will be assisted by the Asian Infrastructure Investment Bank (AIIB), a new multilateral development bank backed by Beijing, which cooperates with Saudi Arabia-based Islamic Development Bank to look into the possibility of Islamic financing options at the government level. That way, the AIIB would differ itself substantially from established global development financiers such as World Bank, International Monetary Fund and Asian Development Bank.  Furthermore, three large state-controlled Chinese banks – Agricultural Bank of China, Bank of China and Industrial and Commercial Bank of China – have already issued conventional bonds on Nasdaq Dubai and are likely to follow suit with Islamic financing facilities, namely sukuk, in the near future.  “Islamic Finance could boost cooperation and economic alliances between countries along Silk Road routes, Central Asia, the Arabian Gulf and a large part of the Middle East,” Cheng Manjiang, chief economist and global head of research department at BOC International, the global investment arm of Bank of China, said at the conference in Beijing, adding that “it will also firmly establish Islamic banking in the Chinese market.” And there is certainly a demand for it. There are some 23mn Muslims in China, about 1.8% of the population, comprising two major Muslim ethnic groups, the Huis and the Uighurs. The significance of the entire project becomes clear by looking at the sheer numbers: The One Belt, One Road initiative, which not only includes a land route, but also the so-called “Maritime Silk Road” that leads from the South China Sea across the Indian Ocean to the Arabian Sea and further to East Africa, connecting China with Southeast Asia, Sri Lanka, India, Oman and the Arabian Gulf, as well as Kenya and Tanzania, is expected to impact development in more than 60 countries along both routes and benefiting more than 60% of the world’s population by stepping up global commercial activity.
Posted by Tugrul Keskin at 12:48 AM