China's relationship with Israel is unlike any other Beijing is pursuing in the Middle East. Israel is the closest U.S. ally in the region and dependent upon American military aid to keep its armed forces on the cutting edge. Yet China is trying to use the heft of its financial investing to make inroads into Israel and the region. On Oct. 25, Chinese Vice President Wang Qishan completed a three-day trip to Israel, where he sought to expand the Belt and Road Initiative and undermine U.S. influence. The visit produced few new developments in their relations — only promises of future free trade and cooperation — but it did serve to heighten U.S. concern about Beijing's influence there.  In the short term, China is trying to get access to Israeli technology and the know-how behind its vibrant startup environment. In the long term, it is trying to build up a greater partnership to open doors for future strategic development in the Middle East. To do so, it must contend with Israel's close ties to the United States and any obstacles Washington could throw in its way.


Following is the full text of his interview with Tehran Times and Mehr News Agency:
Q: What are the areas of integration between China and Iran? The two countries believe in multilateralism and disagree with U.S. shift towards unilateralism. For example, Shanghai Cooperation Organization is a good example of multilateral policy. Where does china stand on Iran's permanent membership in SCO?
A: In June this year President Rouhani visited China to attend the Shanghai Cooperation Organization (SCO) summit held in Qingdao. The meeting was a great success. We made very good progress to map the direction of the future development of the organization. President Rouhani played there an active role and made positive contribution to the success of the summit. Two presidents also held a bilateral meeting on the sidelines of the summit. They discussed intense cooperation between 2 countries. I think that the relationships between our countries are mutually complementary. It is for the benefits of two countries as well as our nations. So there is a great potential for two countries to work together. We can build on the previous achievements to make further progress in political, economic, security, cultural areas and people to people exchange.
You mentioned about the possible membership of Iran in SCO. I would like to say that during president Xi’s visit to Tehran, two leaders issued a joint statement in which China made its position quite clear on this issue. China would be happy to see Iran play a greater role in SCO and we support Iran to be a full member of the organization.  We wish to emphasize the bilateral economic cooperation. The cooperation between two countries are in line with obligations that each of us undertake. The cooperation is transparent and legitimate.

China in the Middle East: The Iran Factor

Key Points
Summary
As the first paper in this series indicated, China seeks to develop its relationships with Middle Eastern states for a number of reasons. Those include Beijing’s need to secure its energy imports, to secure its exports via routes that pass through the Middle East and, in the longer term, to increase its regional influence and displace the United States in the region by doing so. These objectives apply fully to its relationship with Iran, perhaps more so than they do with other regional states like Saudi Arabia and the UAE. Both countries increasingly see themselves as being brought together by those goals and, just as importantly, by President Trump, who sees both as competitors and adversaries to be countered. They perceive the US as a common enemy that needs to be fought jointly by both.

DUBAI, Oct 25 (Reuters) - Kuwait has signed a memorandum of understanding with Chinese oil major Sinopec to build a refinery in the south of China, the Kuwait Oil Ministry said on Thursday. (Reporting By Asma Alsharif Writing by Tom Arnold Editing by David Goodman)

China has agreed to begin free-trade talks with Palestine, Beijing said on Wednesday, in the latest sign of the country trying to increase its political and economic engagement in the Middle East. Commerce officials from the two sides signed a memorandum of understanding during Chinese Vice-President Wang Qishan’s visit to the region, the first by a top level official in almost 20 years, the commerce ministry said in a statement.  Wang, who oversaw the signing ceremony with Palestinian Authority Prime Minister Rami Hamdallah, was quoted as saying that Beijing stood with the Palestinian people and continued to support peaceful negotiation and the “two-state solution” to its dispute with Israel.

Will China abandon the Palestinians?

China appears to be operating with the mistaken assumption that it can be pro-Palestine and pro-Israel at once.

China's Vice President Wang Qishan arrived in Israel on Monday for a four-day visit to head the fourth China-Israel Innovation Committee. He is the highest-ranking Chinese official to visit Israel in nearly two decades.  In April 2000, the former president of China, Jiang Zemin was the first Chinese leader to ever visit Israel, touring the Yad Vashem Holocaust Museum and paying diplomatic dues to his Israeli counterparts. Then, he spoke of China's intentions to cement the bond between the two countries.  Wang Qishan's visit, however, is different. The "bond" between Beijing and Tel Aviv is much stronger now than it was then, as expressed in sheer numbers. Soon after the two countries exchanged diplomatic missions in 1992, trade figures began increasing. The size of Chinese investments in Israel also grew exponentially, from $50m in the early 1990s to a whopping $16.5bn according to 2016 estimates.  On this visit, Qishan is joined by Jack Ma, founder of China's top e-commerce firm, Alibaba. Ma was also in Israel in May to prepare the ground for the ongoing summit, which is expected to yield massive new investments. Much of these investments will be focused on technology, which makes the nature of the China-Israel relationship different from that which bonded Beijing with Arab countries for decades.

Ever since President Xi Jinping bent China’s retirement rules and allowed 70-year-old Wang Qishan, one of his most trusted allies, to become the country’s vice-president in March, Wang’s role and influence in Xi’s administration has remained a subject of constant speculation among China observers.  Publicly, the traditional role of China’s vice-president is largely ceremonial, and the most public function is to receive visiting foreign dignitaries, as Wang has frequently done since his appointment.  Behind the scenes, however, he is widely believed to be one of the most important political figures in the country as he attends meetings of the Communist Party’s Politburo Standing Committee – the country’s highest decision-making body – as an ex officio member. This basically means he is involved in all the important decisions for the country. China’s detention of ex-Interpol chief highlights the arrogance of its anti-corruption investigators

Transcript: NPR's Interview With China's Ambassador To The U.S.

In a wide-ranging interview with Morning Edition's Steve Inskeep, Cui Tiankai, China's ambassador to the U.S., discusses trade and openness between the two countries, better understanding President Trump, China's social credit system.
Steve Inskeep: What is preventing an end to the trade war with the United States, if anything?
Ambassador Cui Tiankai: Well, first, we certainly don't want to have a trade war with the United States or with any other country.
You have one.
Yeah, this is very unfortunate but we want to solve it through negotiation and consultation between the two sides. But in order for the negotiation, the consultation to succeed, we do need goodwill and good faith from both sides.
Are you seeing goodwill or good faith from the United States?
Well, to tell you the truth, not sufficiently.

A Conversation With Wang Yi 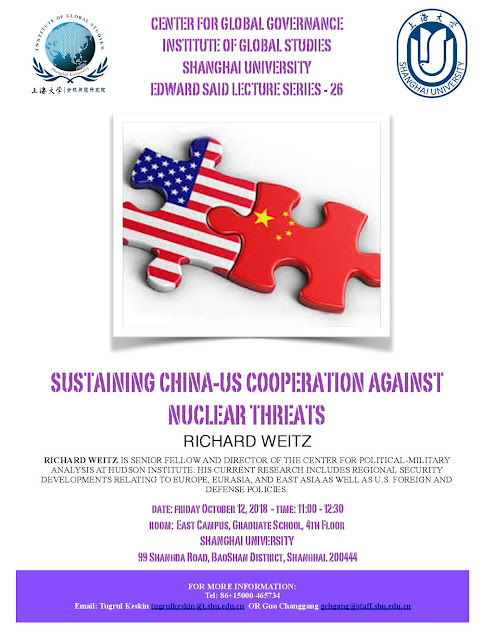 Posted by Tugrul Keskin at 6:51 PM No comments: