Chinese media lights up after a Hong Kong weekly says IS aims to expand into Xinjiang.

They've been grabbing headlines nearly everywhere else, but the jihadis of northern Iraq haven't been getting much play in China. But a threat by the Islamic State (IS) of revenge against countries, including China, for seizing what IS calls "Muslim rights" appears to have changed all that. The comments were made in early July, but the news didn't jump the language barrier from Arabic into Mandarin until August 8, when Phoenix Weekly, a Hong Kong-based newsmagazine widely distributed in China, made the IS revenge threats against China its cover story. Since then, the article has been widely syndicated on Chinese news websites and gained traction on social media as well. Ordinary Chinese who may have felt distant from the carnage now feel it creeping closer to home.    The glossy cover of the Phoenix issue features a picture of masked gun-toting jihadis advancing through a desert landscape. The piece inside sounds the alarm over a July 4 speech in Mosul, Iraq by IS leader Abu Bakr Al-Baghdadi where he urged Muslims around the world to pledge their allegiance to him. It quotes Al-Baghdadi saying that "Muslim rights are forcibly seized in China, India, Palestine" and more than a dozen other countries and regions. "Your brothers all over the world are waiting for your rescue, and are anticipating your brigades," al-Baghdadi told his followers. Phoenix noted that China was mentioned first on al-Baghdadi's list. (The article also includes a map that some news reports have said shows the vast territory IS plans to occupy in the next five years, which appears to include a significant portion of Xinjiang. Although the authenticity of the map, which was widely shared on English-language social media sites in early July, has been questioned, the Phoenix piece reports it as fact.) 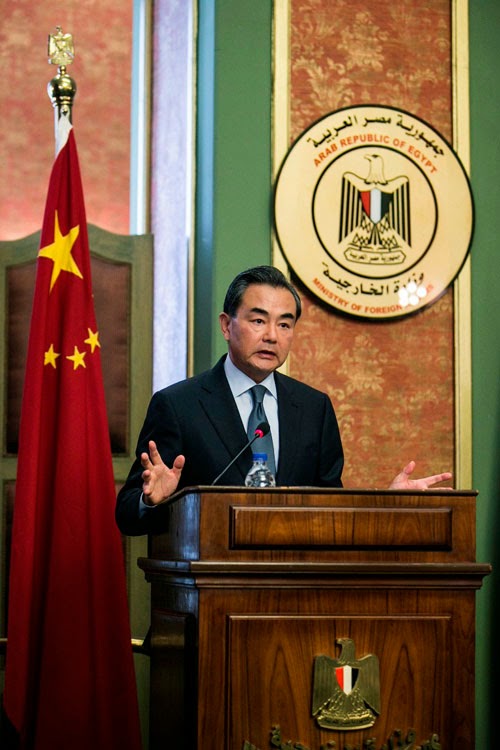 On August 3 local time, Foreign Minister Wang Yi announced China's five-point peace proposal on settling the Israel-Palestine conflict when he jointly met the press with Foreign Minister Sameh Shoukry of Egypt after they held talks.  Wang Yi said that China is a firm supporter and sincere mediator for peace between Israel and Palestine. To stop fighting at an early date and push forward the resumption of peace talks, China raises a five-point peace proposal on settling the Israel-Palestine conflict:  First, both Israel and Palestine, on the basis of maintaining peoples' safety and regional peace, should immediately and completely cease fire. Air strikes, ground military operations, rocket projectile launch and others must be stopped. Any behavior of abusing forces that cause civilian casualties is unacceptable. Any actions of countering violence with violence must be abandoned.  Second, China supports the ceasefire initiatives proposed by Egypt and other countries. Both Israel and Palestine should give up pursuing the unilateral appeal by force, and should find out a plan for common security through responsible negotiations and build a necessary guarantee mechanism for it. During the process, Israel should lift its blockade of Gaza and release Palestinian detainees. Meanwhile, the legitimate security concerns of Israel should also be taken seriously.


China’s involvement in the Middle East is hardly a new phenomenon. It can rather be traced back to the 9th century and the time of the Silk Road. Before the start of the new millennium, China’s interest in the Middle East was limited. The beginning of the 21st century, however, has seen an unprecedented extension of Chinese influence in the Middle East. Starting with the adoption of the “going out” strategy in 2001, China has dramatically increased its footprint in the region. Focusing on foreign investments, construction projects, and the development of natural resources, China has become a major player in the Middle East. Its influence today goes beyond economics, also incorporating diplomacy and soft power. The Chinese approach of focusing on commerce and keeping a low profile constitutes a remarkable contrast to the dominant foreign power in the region, the United States. Unlike U.S. policies, China’s foreign policy rejects the interference in domestic affairs of other states and the projection of military force. As a consequence, considering the various U.S. military entanglements in the region, an increased Chinese role in the Middle East is welcomed by most of the region’s governments. It is fair to argue that China’s profile and influence in the region is increasing at the same time that U.S. influence is in decline.This paper examines the growing role of China as a soft power in the Middle East following Deng Xiaoping’s policies to liberalize the Chinese economy in 1978. As a result of the neoliberal trend in China, more than 350 million new members of the middle class emerged; by 2020, this number will increase to 500 million according to the World Bank. The emergence of a large middle class in China created additional energy and security needs for the Chinese Neoliberal state and society. Therefore, in this paper, we will examine how the political economy has shaped and restructured Chinese’s Foreign Policy in the Middle East. Unlike Chinese Foreign Policy in Africa, the Middle East is considered a backyard of the American empire; therefore, the Chinese have moved quietly and gradually into the Middle Eastern market to obtain a greater share of oil and energy resources, unlike more aggressive strategy in Africa.  In this paper, we will review this gradual change of Chinese foreign policy in the Middle East based on their needs for additional energy resources for the emerging middle class in China.

Does Chinese Engagement In Africa Boost Continent’s Integration?
Ewelina Róża Lubieniecka1,2
1University of Warsaw, Poland; 2Xiamen University, China; ewelinalubieniecka (at) gmail.com
The purpose of this paper is to review the possible benefits and challenges of Chinese engagement in Africa in terms of the continent’s integration. Benefits of integration of Africa seems to be obvious: it would result in higher credibility, coordination of trade (and other) policies, higher possibility of conflict prevention and increased investment (thanks to lower distortions and bigger markets which would enable economics of scale), so therefore to increased global competitiveness. Taking into consideration that there are 15 landlocked countries in Africa, further integration (within RECs, NEPAD and African Union) should be considered as important for providing e.g., energy and water supply security for continent. China is already contributing to regional integration through the development of infrastructure. Nevertheless Sino-African relations have another institutional framework: Forum on China-Africa Cooperation. Does this multiplicity of organizations with overlapping memberships contribute to the practical achievements of regional integration or the opposite? Does Chinese engagement encourage African countries to speak with one voice in order to be stronger during negotiations? Chinese model of cooperation described by Joshua Ramo as ‘Beijing consensus’ differs from Western model, referred as Washington consensus. Does Beijing consensus provide better opportunities for integration?

Chinese Soft Power in Africa. The Changing Status of PRC in the Continent.
Monika Krukowska
Warsaw School of Economics, Poland; monika_krukowska (at) wp.pl
Regardless the world financial crisis, African countries keep the fast rate of economic development. Within the last decades the People's Republic of China (China) has become Africa's major trade and economic partner. China’s outstanding economic development, followed by its growing political importance, has given Beijing new and powerful - though less visible - instruments to exert pressure on African countries. Soft power capabilities such as culture, education, diplomatic power turned out to be efficient and helpful tools in implementing Beijing’s foreign policy and economic goals. Thanks to its growing engagement, China has turned from an insignificant partner, uncomparable to Western democracies, to an important player with significant outlook for the future. However China still has a long way ahead to become a real soft power holder and make full use of its capabilities.

China's Foreign Policy: Increasing bargaining Power by decreasing commitment in North Korea-China Relationship
SEUNG HEE HAN
Korea University, Korea, Republic of (South Korea); mwlohs (at) naver.com
U.S calls for China play a pivotal role to solve the North Korea nuclear issue. How can China increase its bargaining power in North Korea-China relationship? Glenn H. Snyder explains that the dependence, commitment and interest can affect bargaining power in alliance. According to his theory, the lesser a state commit to the alliance the greater bargaining power it gets. During the 1st nuclear crisis, U.S and South Korea requested China to cooperate with them for the settlement but China was reluctant and passive to engage. As a result, the bargaining power of China became greater in the 2nd crisis. China’s enlarged bargaining power influenced the settlement of the 2nd nuclear crisis. China could wield its leverage to make North Korea respond to its demand and offer. However, its commitment led to decrease the bargaining power at nuclear tests in 2005, 2006. From its past experience, North Korea realized that China would not loosen its commitment. This is why China lost its part as a host of six-party talks during U.S and North Korea came to the ‘2007 Agreement’. Therefore, being bystander can be better option for China to maximize its bargaining power unlike U.S.
Posted by Tugrul Keskin at 11:49 PM No comments:


GAZA, Aug. 4 (Xinhua) -- Islamic Hamas movement on Monday Hailed the China's proposal for a ceasefire in Gaza, Hamas spokesman Sami Abu Zuhri said in an emailed press statement sent to Xinhua on Monday.
It said that Hamas highly appreciates China's position and other international positions that support the Palestinian people' s rights.
Chinese Foreign Minister Wang Yi urged on Sunday in Cairo both Israel and the Gaza-ruling Hamas to stop the ongoing fighting, calling on Israel to lift its blockade of the restive enclave and release the Palestinians.
"China's position supports the rights of the Palestinians to live in dignity without siege and closures. Hamas wants this position to be developed until Israel meets the just humanitarian demands of the Palestinians," said Abu Zuhri.
Wang, who started his two-day visit on Saturday, raised a five- point proposal on ceasefire in Gaza, saying China is a firm supporter and sincere mediator for the peace between the Palestinians and Israel.
He stressed on China's support for the initiative of truce proposed by Egypt and other countries, urging both the Israeli and the Palestinian sides to stop pursuing their unilateral demands by using forces.
Both sides should seek programs with mutual safety through responsible negotiations and establish a necessary security mechanism, he said, adding that during this course, Israel should lift its seven-year-long blockade on the Gaza Strip and release the Palestinians. On the other hand, Israel's reasonable concerns over its security issues should also be noticed, Wang said.

The murder of a state-backed imam in China's Xinjiang region underscores an escalation in 18 months of violence and could be part of a bid by extremists to persuade moderate Muslim Uighurs to turn against Beijing's controlled current of Islam.
The targeting of Uighur officials or religious leaders has been an undercurrent of unrest for some 20 years in Xinjiang, where members of the Uighur minority are unhappy at official restrictions on their culture and religion.
Jume Tahir, the imam at China's largest mosque, Id Kah, in the Silk Road city of Kashgar, was killed on Wednesday by three suspected Islamist militants armed with knives. His predecessor narrowly survived a knife attack in the same spot in 1996.
But the attack contrasted with most recent violence aimed at the majority Han ethnic group and may be calculated to persuade Uighurs to fall in behind what China says are separatists seeking an independent state called East Turkestan.

Posted by Tugrul Keskin at 2:38 AM No comments: