For Allah, Beijing and Marx: Young imams in China espouse Islam through prism of party line 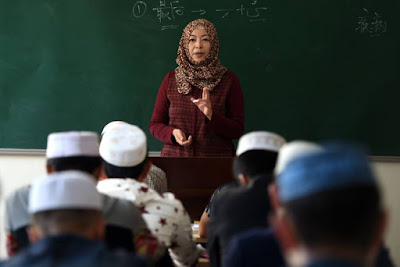 NINGXIA, CHINA – Every morning on his way to class at one of China’s largest Islamic institutes, Wang Yue is reminded that the state comes before Allah.
Emblazoned in gold etching on a white marble slab at the main entrance — and repeated all over campus — is the slogan: “Love the nation, love religion.”
The contrast is even more striking than the hierarchy: in China patriotism is synonymous with supporting the ruling Communist Party, which is officially atheist.
But the students see little contradiction between the teachings of Marx and those of Muhammad.
“Part of being a good person, and a good Muslim, is loving your own country,” said Wang, who is in the last of his four years of studies at the institute in the northern region of Ningxia.