The Hui: China’s other Muslims

By choosing assimilation, China’s Hui have become one of the world’s most successful Muslim minorities 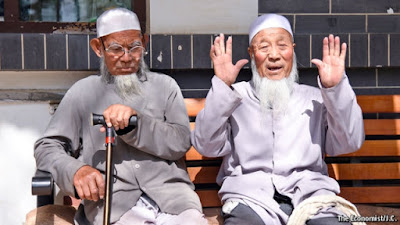 THE faithful are returning from the haj. Waiting for prayers outside the Great Mosque in Tongxin, a remote town in the western province of Ningxia, Li Yuchuan calls his pilgrimage a liberation: “Our prayers are just homework for it.” His 84-year-old friend (pictured, right) leaps up and twists himself with lithe agility into the shape of a pretzel. “We Muslims pray five times a day,” he says. “We are flexible and tough.” China’s Muslims need to be.  China has a richly deserved reputation for religious intolerance. Buddhists in Tibet, Muslims in the far western region of Xinjiang and Christians in Zhejiang province on the coast have all been harassed or arrested and their places of worship vandalised. In Xinjiang the government seems to equate Islam with terrorism. Women there have been ordered not to wear veils on their faces. Muslims in official positions have been forced to break the Ramadan fast. But there is a remarkable exception to this grim picture of repression: the Hui.