On Nov. 2, professor Talip Kucukcan, a member of Turkish Parliament, led a delegation to visit RDCY, along with professor Tugrul Keskin, a research fellow of Turkey Research Center at Shanghai University, and several researchers from Turkey. He Fan, Chief economist of RDCY, Chen Xiaochen, Head of the International Studies Department, and Cheng Cheng, associate researcher of RDCY attended the meeting. The meeting was hosted by Yang Qingqing, Director of the Research Cooperation Department of RDCY.
Professor Kucukcan introduced the current development situation and problems of Turkey, and tried to explore the cooperation potential between China and Turkey. Both sides also exchanged their views on the issues such as the long term influences of "Belt and Road Initiative" on the China-Turkey relations, the focuses and concerns of Chinese foreign investment. 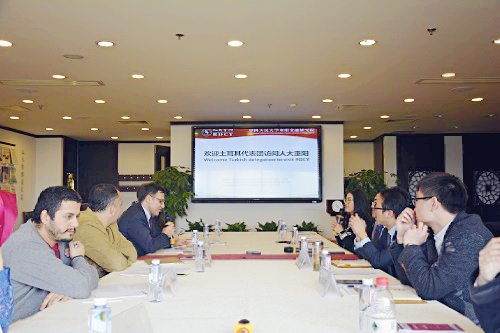 Posted by Tugrul Keskin at 5:54 AM