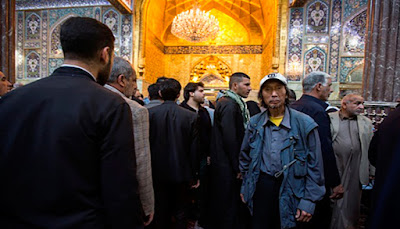 Lee Cheung, a Chinese traveler arrived at the holy city of Karbala on his bicycle after a journey that has reached its 18th year. In a special interview with Lee, he stated that all he carries with him on his journey is his bike, some food and clothes. He began his journey from China back in 1997 and during the 18 years, he visited 145 countries and faced many difficulties. Cheung further stated his admiration of the Iraqi people:
“I found them to be caring and very kind, which further added to my love for this country, I had visited the holy cities of Najaf and Kadhmiyya and today I am visiting Karbala. Back in China, I used to always hear about a man who sacrificed himself for the truth and his name was Imam Hussain.”
Lee Cheung is considered one of the most adventurous travellers globally and will be continuing on with his journey to other countries moving forward.
Posted by Tugrul Keskin at 8:22 AM