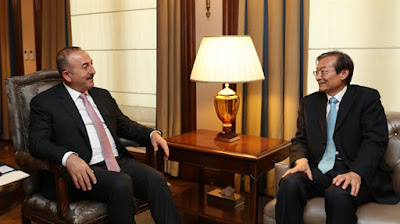 A key member in the Chinese government is paying a three-day state visit to Ankara, expressing his country's goodwill during his meetings with Turkey's top government officials, according to Foreing Ministry.  The Foreign Ministry stated that Chinese deputy Foreign Minister Zhang Ming is paying an official visit to Turkey to convey the Chinese government's message detailing its support to President Recep Tayyip Erdoğan and Prime Minister Binali Yıldırım, two weeks after the failed coup attempt.  Ming, who has held talks with Foreign Minister Mevlüt Çavuşoğlu, has also been received by Energy and Natural Sources Minister Berat Albayrak.  The visiting deputy FM, who began his official visit on Aug. 3, is due to leave on Aug. 6, Friday.  Military officers, loyal to government, acting together with the pro-government police forces and millions of citizens, have accomplished dismantling the July 15 coup plot, orchestrated by FETÖ members, nested within the military.  During the violence of the July 15 coup attempt, 246 people were killed and over 2000 were wounded, officials said.  Gülen, wanted for terror charges in his homeland, is also accused of attempting to take control of the state with the support of his followers who infiltrated key organizations like the military, the police and the judiciary.
Posted by Tugrul Keskin at 9:56 AM