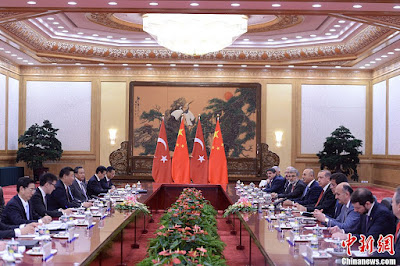 China's Vice Foreign Minister Zhang Ming has visited Turkey in a bid to boost bilateral ties following an attempted military coup in the country last month.  He will meet Turkish officials to discuss the recent situation and exchange views on international and regional issues, according to Hua Chunying, spokesperson of China’s Ministry of Foreign Affairs.  China hopes the visit will further enhance the two countries’ mutual trust, as well as contribute to a stable and healthy development of relations between the nations, she added.  The coup attempt against the Turkish government on July 15 left more than 300 people dead and more than 2,100 injured.  Turkey’s government has cracked down on those it considers associated with the coup-plotters, arresting thousands of people, sacking or suspending as many as 15,000 state education employees and detaining journalists from independent media outlets.  Fethullah Gulen, the exiled cleric and former Recep Tayyip Erdogan ally who has since been blamed for the coup, suggested to The Guardian that the Turkish president may have staged the coup himself in a bid to consolidate power and persecute enemies.

Posted by Tugrul Keskin at 9:53 AM