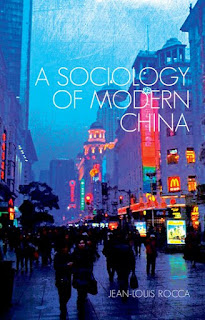 Jean-Louis Rocca's admirably concise A Sociology of Modern China wears its scholarship lightly and paints an intimate and complex portrait of Chinese society, all the while avoiding clichés and simplifications. He delves into China's history and examines the country's many different social strata so as to better understand the enormous challenges and opportunities with which its people are confronted. After discussing the long march toward reform and the crises along the way - among them the 1989 protests which culminated in the events in Tiananmen Square and elsewhere - Rocca dedicates the second half of the book to the major questions facing the country (or, at the very least, its political elites) today: new forms of social stratification; the interaction between the market and the state; growing individualism; and the pressures exerted by social conflict and political change. In eschewing culturalist visions, Rocca thoroughly and successfully deconstructs received wisdom about Chinese society to reveal a thriving nation and its people.


Table of Contents
Introduction
Orthodox Thinking
Culturalist Impasses
The Impasses of Transitionalism
A Critical Reflection
1. Historical Trajectory
Before the Revolution
A Grey Page
New Solidarities: Towns and Cities
New Solidarities: The Countryside
The Tragic Failure of Totalitarianism
2. The Long March of Reforms
The Mutual Formation of the State and Market
A Marginal Capitalism (1979DS91)
The Time of Fractures (1992DS2007)
3. A New Society
The Conditions of Social Mobility
The Morphology of Chinese Society
The Dangers of Imbalances
The Ideal Class
4. A Society of Individuals in a Time of Reforms
A Society of Subjects of their Own Existence
Effects of Fashion
Social Anxiety
Sex and Marriage in the (Chinese) City
Children
5. The Political Puzzle
A Moderate Pluralism
The Internet Revolution and its Limits
Elections and Electors
A Thermidorian and Technocratic Elite
Social Protect
Intellectuals in No Man>'s Land
Creating a Middle-Class China: A Source of Conflicts
Identities and Nation
Conservative Democracy
Conclusion
Elements of Genealogy
All is Well
Modernisation is not a Gala Dinner
Conservatism and Representation
Posted by Tugrul Keskin at 9:50 AM