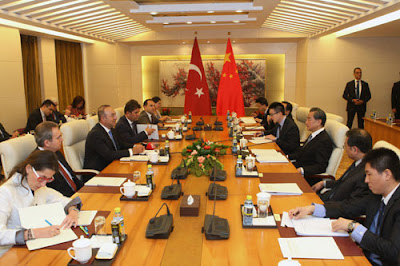 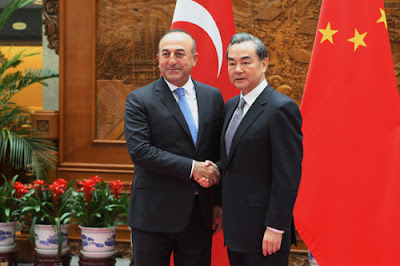 On April 27, 2016, Foreign Minister Wang Yi met in Beijing with Foreign Minister Mevlut Cavusoglu of Turkey, who was in China to attend the fifth Foreign Ministers’ Meeting of the Conference on Interaction and Confidence-Building Measures in Asia (CICA).  Wang Yi said that both China and Turkey are founding members of the CICA, and China is willing to communicate and cooperate with Turkey to well implement the consensus reached in the 2014 CICA Shanghai Summit, enhance confidence of Asian countries and persist in resolving issues through dialogues and consultations, in an effort to eventually build a security framework acceptable to all sides and consistent with the trend of regional development.  Wang Yi said that China stands ready to work with Turkey to implement the important consensus of the two heads of state, integrate development strategies, carry out cooperation in infrastructure and energy, and jointly push the G20 Hangzhou Summit towards success.  Wang Yi emphasized that cooperation in counter-terrorism and security is an important content of the political mutual trust between China and Turkey, and that the two sides should cooperate closely to jointly fight against terrorist organizations including the “East Turkistan Islamic Movement (ETIM)”, combat extremism, and deter illegal immigration.  Mevlut Cavusoglu congratulated on the successful convening of the 5th CICA Foreign Ministers’ Meeting, and expressed that Turkey will keep close cooperation with China to jointly promote security in Asia. Mevlut Cavusoglu said that Turkey attaches great importance to Turkey-China relations, and stands ready to continue to carry out high-level mutual visits and expand economic and trade cooperation with China. China’s security concerns are also Turkey’s concerns, and Turkey will take all necessary measures to practically strengthen bilateral cooperation in counter-terrorism and security, combat illegal immigration, fight against the ETIM, continuously pay attention to China’s security concerns, and allow nobody in Turkey to engage in activities jeopardizing China’s security. Turkey is looking forward to reinforcing cooperation with China in all fields.
Posted by Tugrul Keskin at 4:24 AM