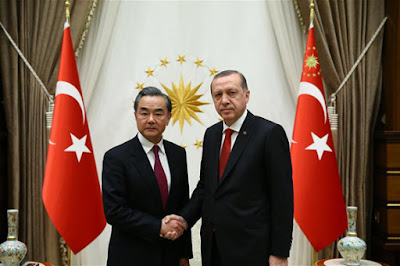 Erdogan said that Turkey attaches great importance to China-Turkey relations and is willing to maintain high-level exchanges to address issues concerning partnership through strategic cooperation.  "I'm pleased to see the consensus reached between Chinese President Xi Jinping and me in our previous meetings being effectively implemented," he said.  He also agreed to align China's Belt and Road Initiative with Turkey's "Middle Corridor" project, push ahead with major cooperation projects such as high speed railway construction and strengthen bilateral cooperation in fields such as tourism, culture and education.  The two countries need to deepen cooperation in security and anti-terrorism and support each other in efforts of safeguarding national sovereignty, security and stability, the president added.  In his meeting with Wang, Yildirim said that frequent high-level mutual visits have played a positive role in boosting bilateral relations between Turkey and China.