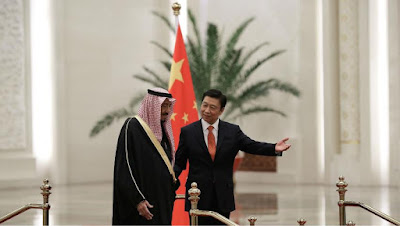 Saudi Arabia and China have agreed to increase cooperation on security and counter-terrorism issues, following talks in Riyadh on Sunday between the two countries' leaders.
A five-year plan for security cooperation was signed between the two nations following talks involving King Salman al-Saud, Crown Prince Mohammed bin Naif and Deputy Crown Prince Mohammed bin Salman with Chinese President Xi Jinping.
This follows a deal struck between the two nations in August, when Mohammed bin Salman visited Beijing. This resulted in 15 preliminary agreements on areas ranging from housing to energy.
Saudi media outlets are touting the visit as part of the kingdom's economic overhaul which aims to reduce its reliance on oil experts.
To this end, Riyadh hopes that such visits will present the oil-rich kingdom as a hub for business and investment opportunities.
Last month, China and Saudi Arabia held their first joint military drills as part of Beijing's latest effort to strengthen ties with the Middle East.

China said it faces a growing threat from terrorism as its global footprint expands, as well as its diplomatic involvement in Middle Eastern affairs.
Members of each side's special forces took part in a fortnight of training focusing on combat skills and tactics near China's southwestern city of Chongqing.

Posted by Tugrul Keskin at 6:36 AM