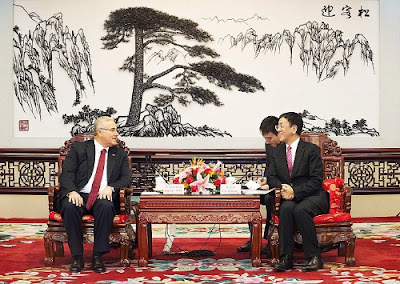 On the afternoon of November 21, the Procurator-General of the Supreme People's Procuratorate, Cao Jianming, met with Mohammed Akkha, Attorney-General of the Supreme Court of Appeal of Turkey in Beijing.  Beijing, 21 Nov (Xinhua) - The Procurator-General of the Supreme People's Procuratorate, Cao Jianming, met here today with Mohammed Akkha, Attorney-General of the Turkish Supreme Court of Appeal.  He said that the friendly exchanges between China and Turkey have a long history.As early as 1,000 years ago, the ancient Silk Road put the people of the two countries in close contact with each other in the human Since the establishment of diplomatic ties in the early 1970s, the two countries have carried out extensive cooperation in the fields of politics, economy and trade, culture, education and law enforcement, and achieved fruitful results, especially in the promotion of bilateral relations in 2010. Since the two countries have maintained frequent high-level exchanges and maintained close communication and coordination in international and regional affairs, they have supported each other on issues of mutual concern, and political mutual trust has been further enhanced, while bilateral relations have been continuously enriched and improved. The two countries have also made in-depth exchanges in judicial and procuratorial areas, especially in the field of anti-terrorism and security cooperation, which has effectively safeguarded the stable development of the region, and will surely promote the exchange of judicial and law enforcement between the two countries. Pragmatic cooperation play a positive role in promoting.  The Chinese government is firmly opposed to all forms of terrorism and violent extremism, said Cao Jianming, vice-chairman of the National People's Congress (NPC), who said that the two countries are facing serious challenges to terrorism and crimes against humanity and social order. The two countries have reached important consensus on the cooperation in the field of security and counterterrorism and have made positive progress.Facing the increasingly complex and complicated international counter-terrorism situation, it is hoped that the law enforcement and judicial organs of the two countries can actively implement the important consensus reached by the two heads of state Deepen and strengthen law enforcement and judicial security cooperation to jointly combat various forms of terrorist crimes, effectively safeguard their national security and regional stability, and constantly enrich the content of China-Turkey strategic cooperative relations.  Mohammed Akaka thanked Attorney General Cao Jianming for his enthusiastic meeting with the Chinese procuratorial organs to enhance the joint efforts to crack down on terrorism and widen the area of judicial and judicial cooperation. He also tried to elevate the friendly relations between the procuratorial organs of the two countries to a new one. Higher level.  Turkish Ambassador to China Murat Ersoy attended the meeting.
Posted by Tugrul Keskin at 4:57 AM