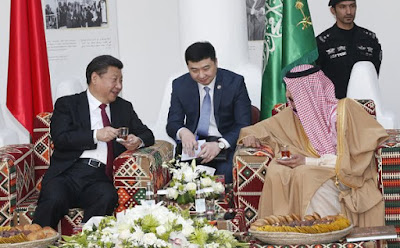 Chinese President Xi Jinping arrived in Saudi Arabia on Jan. 19 to begin his state visit to the three nations of Saudi Arabia, Egypt and Iran in the Middle East. This is Xi's first overseas visit this year, which not only shows the close relations between China and these countries, but is also manifest of China's attitude toward helping create an atmosphere of peace in the Middle East.  Saudi Arabia is China's biggest trade partner in Western Asia and Africa, and also the biggest supplier of crude oil. Egypt is the first country that established diplomatic relations with China among the Arabian countries in Africa. Iran is an important country for Chinese investment and a cooperative partner in the Middle East.  All the three countries are great powers in that region. However, after the "Arab Spring," the political situation in Egypt became unstable. On Jan. 4, Saudi Arabia cut off diplomatic relations with Iran, which exacerbated the crisis in the region.  President Xi's visit showcases the friendly relations between China and the Arab region. China's long-term policy, which features mutual respect and non-interference in others' internal affairs, seems to have made Chinese suggestions very welcome among the nations in the region.  A range of opinions regarding the suppositions that China wants to mediate the Saudi-Iran conflict, that China is not resigned to playing a supporting role in the Middle East, and that China is taking a risk appeared in some Western media reports.