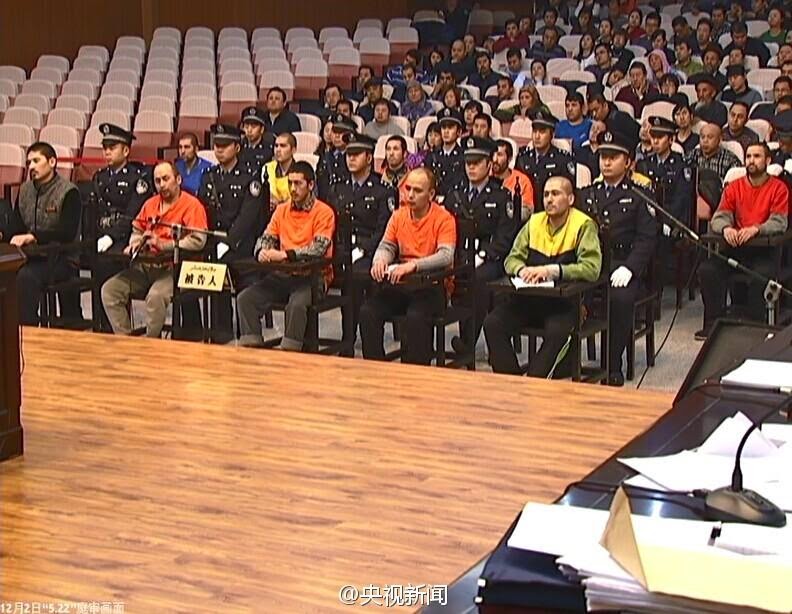 A Xinjiang court sentenced eight people to death on Monday in connection with two deadly terrorist attacks in April and May in the regional capital, Urumqi.
The Intermediate People's Court of Urumqi sentenced another five to death with a two-year reprieve, and four others were sentenced to various terms of imprisonment.
Xinjiang saw its bloodiest day in five years on May 22 when 39 people were killed and 94 injured in an attack on a market in Urumqi. On April 30, three people were killed and 79 were injured in an attack at a railway station in the city.
Those sentenced to death include Ahmat Rixit, head of the group responsible for April's violence, and Abliz Dawut and Nurahmat Ablipiz, main plotters of the May attack.
From February 2010 to April 2014, Ahmat Rixit and his associates gathered many times to listen to and watch audio and video clips about terror under the guidance of Ismail Yusup, a member of the terrorist group Eastern Turkistan Islamic Movement (ETIM).
Following April's violence, the ETIM publicized a video showing a masked man assembling a bomb. The man, later identified as Ahmat Rixit, claimed the incident "a piece of good news," and called those who detonated the bomb "warriors." The video was made by his brother Abliz Rixit.