What Is a Uyghur? 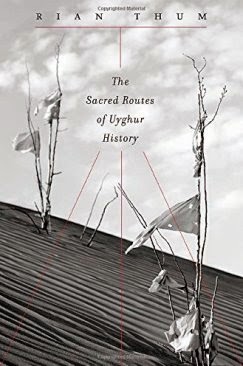 IN THE SCRAMBLE to make sense of the violence and repression in China’s Western region of Xinjiang, where many of the Uyghur inhabitants resist Chinese rule, local Uyghur perspectives have gone largely unreported. The following extract, from The Sacred Routes of Uyghur History, aims to uncover Uyghur understandings of the region’s history and the forces that shaped those understandings. One example of what is commonly overlooked is the term “Altishahr,” a Uyghur word for the part of Xinjiang traditionally inhabited by the Uyghurs (and, incidentally, the name of the most popular Uyghur rap group). In this extract, the word is adapted as “Altishahri,” that is, a person from Altishahr, to address an unusual obstacle to writing about Uyghur history: as of, say, 1900, there were no Uyghurs. “Uyghur” at that time was the name of an extinct ancient kingdom, while the people of Altishahr called themselves simply “Musulman” (Muslim). In the first decades of the 20th century, Altishahri elites revived the “Uyghur” term as a name for their own ethnic group, but it took quite a long time for the name to catch on. That process, outlined below, was accompanied by the radical shift from a media landscape dominated by manuscripts to the eventual ascendancy of the printed word. The fitful and slow penetration of print ultimately facilitated new imaginations of a Uyghur past, transforming an older system of Altishahri history, which had been characterized by tazkirahs, the biographies of local Muslim saints.  (Adapted from The Sacred Routes of Uyghur History by Rian Thum, published by Harvard University Press. Copyright © 2014 by the President and Fellows of Harvard College. Used by permission. All rights reserved.)

Reformers, Nationalism, and the “Uyghur” Identity

Between the fall of Ya‘qub Beg’s state in 1877 and the arrival of Chinese Communist rule in 1949, reform movements laid the groundwork for new ways of understanding the world, which would eventually reshape Altishahr’s approach to the past. Among the new ideas that took root in Altishahr, nationalism represented perhaps the most profound reorganization of Altishahri self-imagination since the arrival of Islam.1 Early ventures in nationalist thought appeared against the background of a dizzyingly complex succession of political upheavals, driven by actors as diverse as Han Chinese anti-Qing revolutionaries, disbanded Qing soldiers, military strongmen, Uyghur nationalists, and communist revolutionaries. In the first half of the 20th century, Altishahr saw Qing imperial rule, tyrannical autocrats, loosely democratic experiments, and early moves toward socialism.2 At the same time, printing, the telegraph, radio, film, and modern industry made their first inroads in the region. There is no room in this study for an in-depth look at all of these phenomena in their interaction, but it would be impossible to discuss the encounter between nationalism and Altishahri tazkirah-based historical practice without providing a thumbnail sketch of the processes by which nationalist thought became a central feature of the new Altishahri worldview.