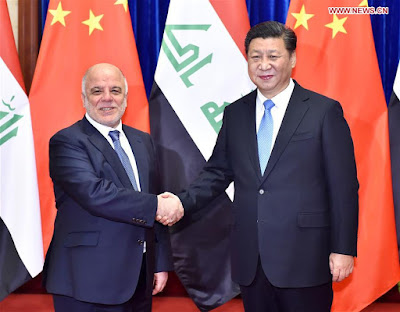 China and Iraq have decided to elevate their ties to a strategic partnership. The news comes after a meeting between Chinese President Xi Jinping and visiting Iraqi Prime Minister Haider al-Abadi in downtown Beijing on Tuesday.
Xi said China supports Iraq's efforts in protecting its national independence and sovereignty. He said China is willing to deepen cooperation at different levels in all fields, including security.
President Xi said China will strengthen strategic coordination with Iraq under the framework of the "One Belt, One Road" initiative, and help with Iraq's reconstruction in key areas such as energy, power, telecommunication and infrastructure.
He also said China encourages its enterprises to join in and invest in large projects in Iraq. The Chinese President said China will closely work with Iraq in regional peace and stability. Abadi welcomed the commitments by Xi Jinping, and said his visit aims to enhance ties with China. He added that Iraq welcomes Chinese investment.