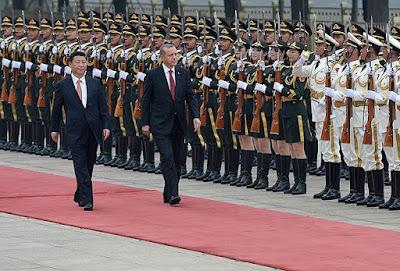 Bilateral trade was the focus of discussion Wednesday during President Recep Tayyip Erdogan's first visit to China as president, but both countries’ leaders also touched on more sensitive issues.  Turkish presidential sources told Anadolu Agency after Erdogan's meeting with President Xi Jingping that the two statesmen had discussed issues surrounding China's Muslim population.  Around 350 Uighur held at detention centers in Thailand have been at the center of a diplomatic tug-of-war between the two countries, with China identifying them as from northwestern Xinjiang, while Turkey welcomed them as its own.  Turkey has also voiced concerns over reports that members of China's Muslim community had been banned from fasting - suggestions that led to protests against Beijing in Turkey and flag burning by nationalist Turks.  The issue was a topic at the meeting, said the sources who did not wish to be named for reasons of confidentiality.  They added that Erdogan's plan to meet with representatives from China's Uighur and Hui Muslim communities was welcomed by Chinese officials.  "Turkey's sensitivity about Chinese territorial integrity was [also] mentioned in the meeting, as well as not accepting any terrorist incidents inside China," the source said.  Chinese state media has reported that "Muslim terrorists" have orchestrated attacks on police stations and other symbols of the state in the Xinjiang Uyghur Autonomous Region, which many Turks refer to as East Turkestan.  Prior to delegate talks in the Great Hall of People, Erdogan told media that both countries had paved the way for strategic cooperation in 2010 and were now "ready to put those plans into practice."   "We took the first step in 2010 with China with a strategic alliance, and we are now in the practice phase. We are looking at our relations with China from a strategic way," he said.  "This visit will strengthen the understanding between our nations and help cement friendship between our people," he added.  The three-day trip is Erdogan's second diplomatic trip to the country, following a previous visit in 2012 as prime minister.  Since his first election win of 2003, diplomatic relations -- established between the two countries in 1971 -- have significantly improved, peaking over the last 10 years through several high-level bilateral visits.  In 2010, the two countries adopted a “Joint Declaration on the Establishment and Development of the Strategic Relationship of Cooperation,” and bilateral trade -- at $1 billion in 2000 -- is now estimated to have surpassed more then $24 billion.  President Xi Jingping highlighted the importance of such economic relations remaining on a firm footing Wednesday, saying that he hopes they will continue to be "rich in content."  The countries signed several agreements over the course of the day, among them a Memorandum of Understanding on Establishing a Cooperation Committee between Turkey and China on Deputy Prime Ministers' Level, and a Development Plan for Middle and Long Term about Mutual Encouraging and Protection of Investment Between Turkey and China.  The sources told Anadolu Agency that Erdogan and Xi Jingping have now targeted $100 billion in trading volume and will invite businessmen to visit both countries.  Erdogan began his visit with a trip to the Monument to the People's Heroes in Tiananmen Square where he placed a wreath.  After an hour-long closed door meeting with Prime Minister Li Keqiang, he headed to the National People's Congress for a 30-minute meet with Zhang Dejiang, the head of the country's parliament and the ruling Communist Party's third ranked leader.  Accompanying Erdogan were Foreign Minister Mevlut Cavusoglu, Health Minister Mehmet Muezzinoglu, Transport Minister Feridun Bilgin, Economy Minister Nihat Zeybekci and Energy Minister Taner Yildiz.  On leaving China on July 30, Erdogan is scheduled to fly to Indonesia, where he will meet President Joko Widodo and participate in a Turkey-Indonesia Business Forum.