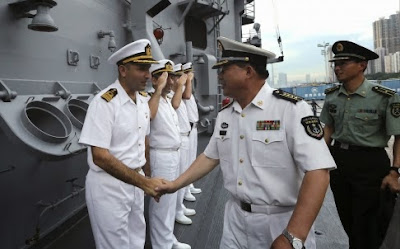 The Turkish navy is paying a rare visit to Hong Kong and mainland waters this week, in a four-day trip that analysts describe as a shrewd move by the European nation to show its traditional allegiance to the West, but also its desire to build ties in Asia, particularly with China.
Last night, Turkey's top diplomat in Hong Kong, Haldun Tekneci, hosted a reception aboard the frigate TCG Gediz, which docked on Friday in the country's first naval visit for four years.
"We are super happy and we are so proud to see this warship because it has travelled so far," he said, adding that the visit was a sign of growing relations with China and the East Asia region.
There was also a meeting at the People's Liberation Army's Hong Kong garrison - a courtesy call, Tekneci said - before they head to Qingdao , Shandong , tomorrow.
The TCG Gediz is making Asia the focus of a 122-day tour that started on April 1, taking in 14 nations with 18 stops in the region.