Are China and Russia Forging a New Ideological Bloc?

With evidence of ties strengthening between Beijing and Moscow—over energy contracts, the handling of the Ukraine, and their diplomats’ stance toward outside interference in internal affairs, especially if it’s perceived as coming from Washington—can the world soon expect Xi Jinping and Vladimir Putin to cooperate more broadly? Why, or why not, and to what effect? — The Editors 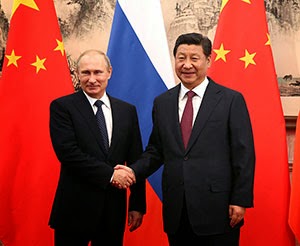 China and Russia can forge an ideological bloc based on shared resentment of the U.S.-led international order, but they cannot be true allies. Their competing interests are too important.
Moscow perceives the U.S.-led West as its current main enemy, interfering with its aspirations in the area from Eastern Europe to the Caucasus. Even so, some Russian analysts identify China as the long-term threat. While the Western powers seek to prevent Russia from expanding, China’s ambitions challenge Russia in the areas that it still dominates. Consider the following:
In recognition of these dynamics, Russia—until recently, at least—has declined to transfer some of its most important defense capabilities to China. And while engaging with the Chinese People’s Liberation Army in both multilateral and bilateral exercises, the Russian military has also continued to hold its own exercises aimed at countering a potential Chinese challenge.

Posted by Tugrul Keskin at 2:51 AM