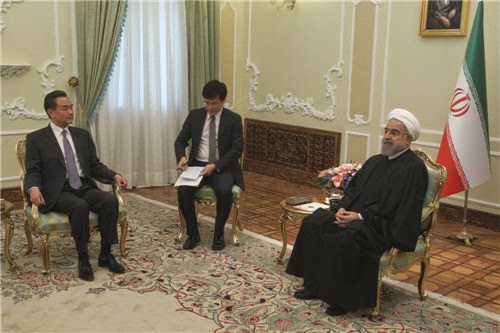 Visiting Chinese Foreign Minister Wang Yi has met with Iranian President Hassan Rouhani in Tehran. The two leaders held talks at the Iranian presidency office on Sunday.
Wang Yi said China looks to expand areas of cooperation with the middle eastern country, and find ways to complement each other for common development. Wang went on to say that China is willing to strengthen coordination with Iran on international and regional issues.
The Foreign Minister also said China appreciates Iran's attitude of not pursuing nuclear weapon ambitions. China will continue to push forward the six-party talks on the Iranian nuclear issue, and hopes a resolution can come soon.
Rouhani said Iran values its relationship with China, and Iran supports China's One Belt One Road initiative. He would also like to expand bilateral cooperation in various areas. He also spoke highly of China's positive role in pushing the Iranian nuclear talks forward.