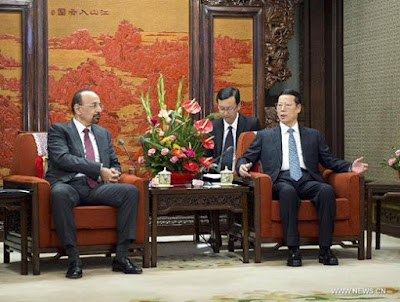 RIYADH — Khalid Al-Falih, minister of energy, industry and mineral resources, held a number of important meetings with senior Chinese officials. The talks focused on enhancing economic cooperation between Saudi Arabia and China.  Al-Falih has met with Chinese Deputy Prime Minister Zhang Gaoli, who is chairman of the Chinese side of the Saudi-Chinese Higher Committee.  During the meeting, they discussed commonalities between the Kingdom’s Vision 2030, and the initiative of an investment belt and road in China emanating from the Saudi-Chinese Higher Committee.  They also discussed issues of common interest in the fields of industry, energy, storage of crude oil, renewable sources of energy, mining, technology, infrastructure, logistic services and sovereign wealth funds.  For his part, Gaoli stressed the great and pivotal role played by the Kingdom in the Arab and Islamic world as well as in the fields of global energy supply and international affairs.  Al-Falih also held a number of meetings with a member of the Chinese State Council for foreign affairs Yang Jiechi; Minister of National Energy Authority in China Noor Muhammad Bakri and a number of prominent bankers and financial officials whose expertise lay in the field of sovereign wealth funds.  During the meetings, issues of common interest and ways of enhancing cooperation between the two countries were discussed.
Posted by Tugrul Keskin at 5:00 PM