As Egypt cracks down on Uyghur students, Chinese Muslims in Cairo are torn between economic opportunity and their faith. 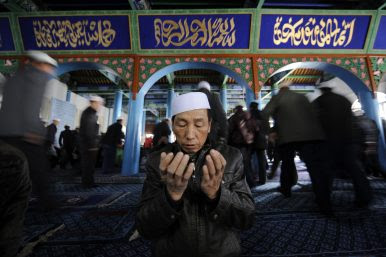 Sitting on cheap plastic chairs in front of a Chinese restaurant on a narrow street in Cairo’s Abbassia district, Ma Songhui seems to have lost his appetite – and for good reason.
Since July 4, scores of his Chinese classmates from Al-Azhar University – all of them Uyghurs from China’s northwest Xinjiang province – have been arrested by the Egyptian police. Those who managed to escape the raids are hiding in the capital or trying to leave the country, according to Sweden Uyghur Education Union President Nijat Turghun. All are afraid of being expelled to China, where they will be at risk of arbitrary detentions and torture.
“Many of their families in Xinjiang were visited by Chinese authorities a few weeks ago. There were pressures; barely veiled threats were made to force them to come home. And then the Egyptian police started raiding restaurants and residences of Uyghurs studying at Al-Azhar. Some have managed to escape, but we expect most to be deported,” said Ma, a 28-year-old Chinese Muslim from Linxia, in the province of Gansu.