Israel and China a 'Marriage Made in Heaven,' Says Netanyahu

Though security cooperation remains limited, the two sides are pushing forward on trade and technology. 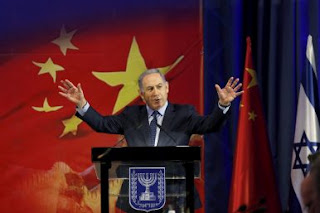 Only a few days after the Saudi king departed from Beijing, the Chinese capital is playing host to another Middle Eastern leader: Prime Minister Benjamin Netanyahu of Israel. Netanyahu met with Chinese Premier Li Keqiang on Monday, followed by a meeting with President Xi Jinping on Tuesday.
Generally, the relationship between China and Israel has been constrained by both distance and geopolitics. Israel is a strong partner of the United States, while China’s historic support for the Palestinian cause has also complicated ties with the Israeli government. As recently as January 2017, Netanyahu announced that Israel would be limiting diplomatic ties with countries (including China) that supported a UN resolution denouncing Israeli settlements in Palestinian territory.
However, China and Israel are both keen to increase cooperation on economic matters. For Beijing, Israel is a particularly attractive partner as China attempts to become a global leader in the high-tech sector. Israel is also a potential hub for China’s “Belt and Road” initiative, given it geographic location. For now, both sides seem content to accept the necessity of more limited political and security cooperation while they attempt to harvest the benefits of an expanded economic partnership.