The Case of the Forged Passports Curtain Coming Down on Erdogan’s Excellent Uyghur Adventure?

To demonstrate that it’s possible, for me anyway, to acquire a lot of useful information in a short period of time via Twitter, I offer for your consideration this series of exchanges (with multipart tweets stitched together for continuity and clarity):


Tweets From Aleppo ‏@halabtweets
The whole northern countryside of #Aleppo is crawling with mercenaries/terrorists from Caucasus, Central Asia, and Chinese Ugyur. #Turkey
chinahand (me)
hmm. wonder if this tweeter knows stuff or just says stuff. Interesting to explore if any of Uyghurs given haven by Turkey have gone on to Syria with any kind of Turkish govt encouragement or knowledge.
Christoph Germann ‏@newgreatgame
Chechens living in Turkey have been forced to go to Syria http://www.al-monitor.com/pulse/originals/2014/11/turkey-chechen-murder-syria-link.html# … same probably true of Uyghurs living in Turkey
chinahand ‏
only a few hundred Uyghurs in Turkey as I understand. If TK subsidized & monitored them in place, PRC might think it’s acceptable. But if TK sending them to Syria to get trained/radicalized/networked, PRC will be seriously PO’d IMO
Christoph Germann ‏@newgreatgame
China tries to prevent Turkey from hosting more Uyghurs http://www.reuters.com/article/2014/11/28/us-china-turkey-thailand-idUSKCN0JC0X920141128 … makes sense given that NED-funded World Uyghur Congress, etc. “take care” of Uyghurs living in Turkey
http://christophgermann.blogspot.de/2015/01/the-new-great-game-round-up-83.html …IMO that’s why Global Times broke story of arrest of Turks/Uyghurs in Shanghai, which happened last Nov https://porkinspolicyreview.wordpress.com/2015/02/07/porkins-great-game-episode-5-east-turkestan-exposed/ …

‏tks. v/ interesting podcast. I think one area of interest for PRC was that TK consulate replaced “lost” passports.  I tend to think Turkish government militancy policy one of “idiotic entrepreneurship” rather than carefully managed policy i.e. set up a bunch of militant-enabling orgs w/ arms-length deniability, let them run wild, then try to rein them in when they become too much of a liability. Chinese media naming Turkey (& PRC MOFI spox Hong Lei endorsing) definitely a shot across the bow. Will be interesting to see if Turkey makes some publicly Uyghur-unfriendly gesture to please PRC.  Hong Lei’s statement that report “extremely accurate” http://tinyurl.com/pob3ccv  a major tell. At same time, report was run in GT, not official govt outlet Xinhua, to soften the blow a bit.
Christoph Germann ‏@newgreatgame
Yes, Turkey immediately sent its police chief to Beijing to calm the waves http://news.xinhuanet.com/english/china/2015-01/26/c_133948355.htm … & http://www.globaltimes.cn/content/905261.shtml …
chinahand ‏
& 155 Uyghurs on Turkish passports in Malaysia! That raised some flags. Tks v/much for v/interesting & informative exchange
Christoph Germann ‏@newgreatgame
Kunming attack suspects also had Turkish passports http://en.people.cn/n/2015/0213/c90882-8850247.html … 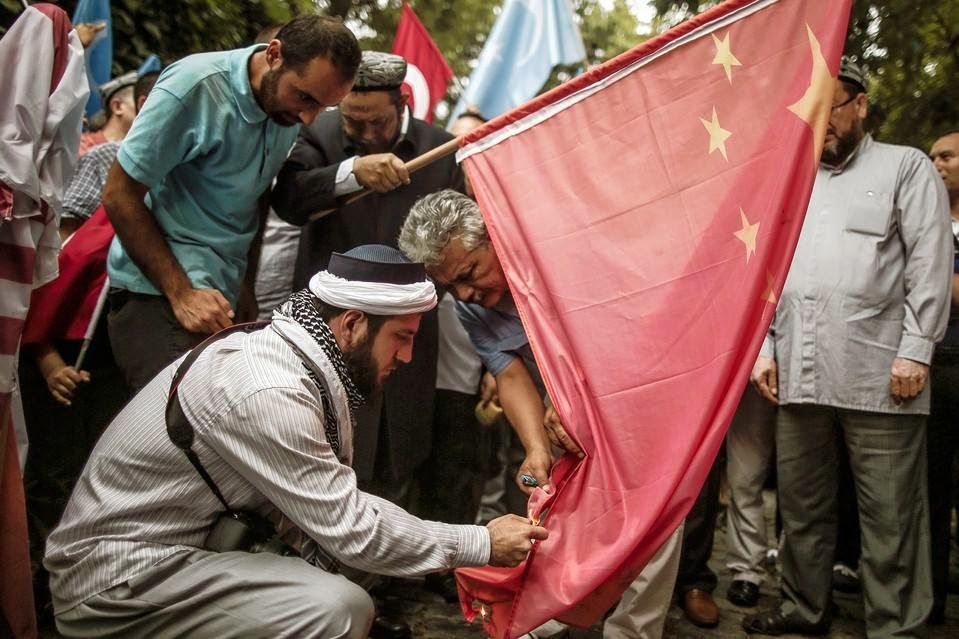 The knowledgeable and cordial Christoph Germann, by the way, runs the New Great Game blog over at Sibel Edmonds’ shop and, as can be seen, stays on top of the news from the region.  I am bookmarking NGG and look forward to visiting regularly.