Recently, we have seen many news and articles on this subject published by North American, Australian and European newspapers and journals. To me, this is based on fear-mongering, rather than any real concerns about China's growing influence in world politics. These 'news items' remind me of Islamophobia, Antisemitism (before the Nazis came to the power) and anti-immigration attitudes prevalent in the US, Europe and Australia. I call this new trend Chinaphobia. In the last few months, many articles have been published on subjects related with the Uyghurs, Hui and Tibet in China, concerning human rights. I agree with some of these articles but disagree with most of them; however, I believe this fear mongering is not about real academic concerns, or human rights but are instead tied more directly with security and policy-oriented scholarship, and most importantly, racism. 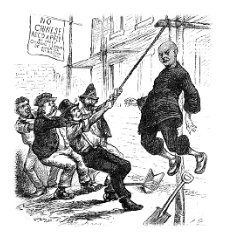 On the other hand, I do not argue that China is a perfect place on earth concerning human rights, democracy, openness, and so on. However, China is a developing country, changing rapidly from a rural populated society to one with an urbanized social structure. Modernization is taking place; people's everyday lives are changing from Shandong to Xian. We need to look at these changes, and tie them to the underlying social, political and economic transformation in the country. Do you think there is a perfect democracy in Europe, when we see a proliferation of right wing and anti-immigration movements? Do you think there are absolute human rights in the US in the context of the Black Struggle, and the experience of American Indians and other minorities? Do you think Australia loves Indians, Chinese, Muslims and Middle Easterners or the aborigines? We have a saying in Turkish, that before you criticize or assume the intentions of others, you need to take a look at the mirror!

Of course, China is trying to influence the foreign and domestic politics of other countries, but so is the US, Germany, Iran, Turkey, Russia, and every other country. Nothing is new here. This is the reality of international relations and comparative politics. If you would like to understand the soft power approach, we should review the Fulbright scholarship or the British Council in Turkey, right? Is China doing anything very different from these examples of soft power political influence in academia? We should answer this question objectively.

Every country in the world has certain social, political and economic problems, obstacles and challenges, like China, Turkey, US or Germany. We, scholars and academicians should study these issues without prejudice or any political agenda. This short piece is a good presentation of prejudice with political agenda within academia. Racism is still alive.

Any thoughts or feedback are very welcome.