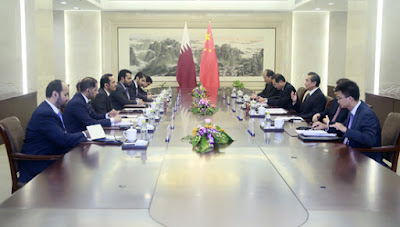 On July 20, 2017, Foreign Minister Wang Yi met with Foreign Minister Sheikh Mohammed bin Abdulrahman bin Jassim Al-Thani of Qatar, who was in China for a working visit, and listened to the views of Qatar on the current Gulf crisis and further expounded China's propositions.  Wang Yi expressed that the current tense situation in Gulf region causes widespread concerns in the international community. A stable and harmonious Gulf region conforms to the fundamental interests of countries in this region, and is also the common expectation of the international community. As a mature regional organization, the Gulf Cooperation Council (GCC) has successfully solved many contradictions and differences. It is believed that the Gulf countries have the capabilities to well manage the current situation and address their differences and contradictions within the GCC framework. At present, all sides should exercise restraint, avoid further deterioration and escalation of the situation, and conduct face-to-face talks as soon as possible, so as to send out a positive signal of sticking to political and diplomatic settlement, and recover confidence of the outside world in the GCC.  Wang Yi said that opposing all forms of terrorism is a broad consensus of the international community. All Gulf parties can, on the basis of jointly fighting against terrorism and in the principle of mutual respect and non-interference in each other's internal affairs, earnestly fulfill respective international obligations, and find a way to resolve the crisis through candid talks in a step-by-step manner, in a bid to reach new consensus of solidarity and harmony among the GCC member states.  Wang Yi stated that China appreciates and supports Kuwait's mediation efforts, and calls on the international community to help create necessary conditions and build a sound environment to resolve this crisis at the regional level. As a sincere friend of Arab countries, China stands ready to play a constructive role in promoting peace talks when needed by all parties.  Sheikh Mohammed bin Abdulrahman bin Jassim Al-Thani said that Qatar highly appreciates and fully endorses China's stance and propositions. Qatar hopes to resolve crises through negotiation and dialogue, and stands ready to launch constructive talks with the parties concerned on the premise of respecting sovereignty, non-interference in internal affairs and complying with international law, and gradually establish mutual trust, so as to address differences fundamentally. Qatar opposes all forms of terrorism and extremism, and has taken necessary measures to this end. Qatar will continue actively participating in international counter-terrorism campaign. China is a great power with considerable influence. Appreciating China's objective and fair stance on the Gulf crisis, Qatar is ready to maintain communication and coordination with China, and hopes China to continuously play a positive role.  Both sides also exchanged views on bilateral relations, and agreed to enhance practical cooperation in various fields under the framework of the joint construction of the "Belt and Road" and adopt more measures on facilitating personnel exchanges.
Posted by Tugrul Keskin at 3:07 AM