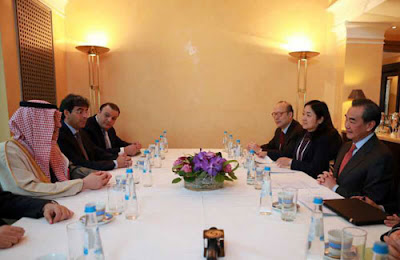 On February 18, 2017 local time, Foreign Minister Wang Yi met with Foreign Minister Adel bin Ahmed Al-Jubeir of Saudi Arabia on the sidelines of the Munich Security Conference.  Wang Yi expressed that China sees Saudi Arabia as an important strategic partner. China is not only a long-term partner of Saudi Arabia in energy cooperation, but also stands ready to further elevate the level of bilateral cooperation, expand new cooperation areas, and continuously be an ideal cooperation partner of the country during the process of its economic diversification, so as to constantly boost the comprehensive strategic partnership between both countries to a new level. The Chinese side is willing to take the visit of the King of Saudi Arabia to China as an opportunity to enhance the docking of bilateral development strategies and speed up negotiations on the China-Gulf Cooperation Council (GCC) free trade area (FTA). China supports Chinese enterprises to expand investment in Saudi Arabia and carry out cooperation on projects such as industrial parks.  Adel bin Ahmed Al-Jubeir said that Saudi Arabia attaches high importance to relations with China, and regards China as a strategic partner and good friend. China is a stable force in international affairs, and both countries enjoy many common grounds. Saudi Arabia is willing to play a positive role in the GCC FTA talks, enhance communication and cooperation between the two countries at bilateral, regional and global levels, so as to facilitate Saudi Arabia-China relations to move toward a deeper, broader and stronger direction. Adel bin Ahmed Al-Jubeir appreciates Foreign Minister Wang Yi's propositions and measures expounded at the G20 Foreign Ministers' meeting on sustainable development and partnerships with Africa.  Both sides also exchanged views on the Syrian issue and other regional hotspot issues.
Posted by Tugrul Keskin at 9:48 AM